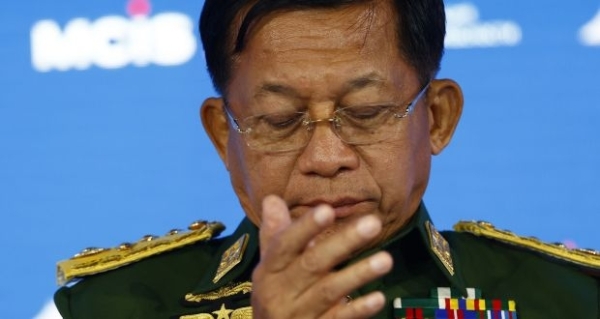 Myanmar’s military junta is expected to take part in hearings at the International Court of Justice (ICJ) this week, in what critics see as an attempt to hijack the legitimate representation of the southeast Asian country – and shift public focus away from allegations of genocide against the Rohingya minority.

Starting on Monday, the hearings arise from an action filed in 2019 by The Gambia, backed by the 57-nation Organisation for Islamic Co-operation, which led to disgraced Nobel laureate Aung San Suu Kyi, then the country’s civilian leader, joining the military to personally petition judges to dismiss the genocide case.

Before the military staged a coup in February 2021, ousting their pro-tem ally Suu Kyi in the process, her government had already filed objections to the jurisdiction of the ICJ, a move regarded as attempt to delay consideration of the substantive genocide claim.

This week’s hearings are scheduled to address only the issue of the court’s jurisdiction.

More than 730,000 Muslim Rohingya fled Myanmar’s Rakhine province in 2017 after a campaign of violence by the military which UN investigators said had “genocidal intent” – but which Suu Kyi claimed had been sparked by “violence and fear on both sides”.

The Rohingya – who are denied citizenship in Myanmar – were forced into tent cities across the border around Cox’s Bazaar in Bangladesh, creating the largest single refugee camp in the world.

In the absence of Suu Kyi, who is facing long jail terms on charges ranging from corruption to inciting dissent, junta representatives are expected to attend the virtual hearings at the ICJ even though the Myanmar military has no formal standing at the United Nations.

“The junta is not the government of Myanmar,” argues Christopher Sidoti, a human rights lawyer and former member of the UN fact-finding mission on Myanmar.

“It has neither the authority nor the ability to act in that capacity at home or abroad. But by appearing before the ICJ, the UN’s highest court, that is exactly what it will be attempting to do.”

The military coup last year was prompted by a general election in 2020 in which 70 per cent of voters rallied to Aung San Suu Kyi and her National League for Democracy – a result the military claimed was rigged.

On that basis, says Tun Khin of the Burmese Rohingya Organisation UK, the junta has absolutely no mandate to represent Myanmar.

“Myanmar’s people have clearly rejected the junta. The entire international community, including the ICJ, should hear this – and not lend it any form of legitimacy.”

The relationship between the ICJ and Myanmar is further complicated by the fact that although the junta apparently intends to continue to challenge the court’s entitlement to hear the genocide case, the country’s national unity government (NUG), including deposed politicians in exile, says it has withdrawn all such objections.

In a statement, the NUG also noted that as a result of “a bureaucratic idiosyncrasy”, the ICJ in The Hague had been communicating with Myanmar diplomats based in Brussels, who were, it said, “under the control of the junta”.

“Should the ICJ effectively recognise the military, it would embolden the junta to continue and escalate its daily atrocities,” it warned, urging the court to deal only with Myanmar’s permanent representative to the UN, Kyaw Moe Tun.

This is an issue that has immediate practical importance as the ICJ hearings get under way, contends Marc Weller, professor of international law at Cambridge University.

As the principal judicial organ of the UN, the ICJ appears, Weller says, “to be out of step with other organs of the UN system which have condemned the coup and demanded a transfer of authority back to the elected legitimate government.

“It also raises important issues about the credibility of international law, including the presumption and principle of good faith on which it is based.”

Ironically, it’s understood that since it seized power, the junta has been engaging with the ICJ and providing the six-monthly reports ordered by judges in December 2019 as a means of monitoring the plight of the Rohingya. The court has apparently been accepting those reports, which are not made public.