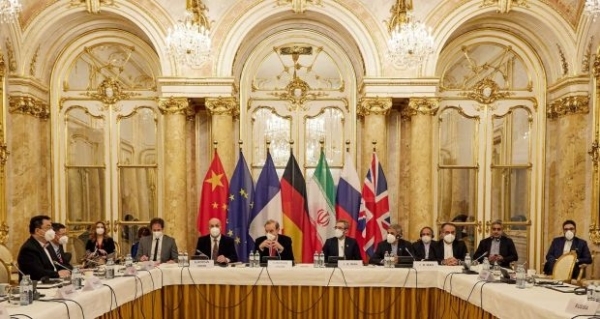 Representatives at a meeting of the joint commission on negotiations aimed at reviving the Iran nuclear deal in Vienna, Austria. Photograph: AFP/Getty Images

Closed-door negotiations in Vienna on reviving the 2015 deal limiting Iran’s nuclear programme in exchange for lifting sanctions resume on Tuesday in a positive atmosphere as the talks appear to have gained forward momentum.

Writing in her online newsletter Diplomatic, talks expert Laura Rozen said Russian and European envoys were “upbeat” over the endgame talks. Russian negotiator Mikhail Ulyanov told her, “my assessment: we can finalise the exercise by the end of February, maybe earlier if nothing unexpected happens”.

On the US side a shift was signalled by the departure of three team hawks, notably deputy envoy Richard Nephew, an expert on sanctions who advocates a tougher stance than that adopted by the Whit House. The US also authorised South Korea to release $18 million from blocked Iranian bank deposits to pay Tehran’s arrears to the UN, thereby restoring its General Assembly voting rights.

US president Joe Biden signed waivers to lift sanctions which discouraged discussion of Iran’s return to compliance and work by European, Chinese and Russian experts at Iranian nuclear facilities.

Iran analyst Barbara Slavin told the Associated Press the waiver was “a necessary prerequisite to restoring the [Iran nuclear deal] and thus a good sign that this can be accomplished”.

On the Iranian side, supreme leader Ayatollah Ali Khamenei – without whose backing there can be no deal – has signalled flexibility in the negotiations while refusing to surrender to the US, and has, reportedly, begun preparing the Iranian public for compromise.

Months ago the US compromised by dropping its insistence that curbs on Iran’s ballistic missile programme and regional activities be included in a new deal. Having rejected these demands, Iran has pledged to return to full compliance although there could be compromises on its call for an end to all sanctions and guarantees the US will not again leave the deal.

Iran could expect to gain access to most of $100-120 billion in funds frozen in foreign banks from the lifting of sanctions.

Both sides have said they are ready to negotiate directly. Since talks began the US has been involved indirectly through EU mediator Enrique Mora and the other five signatories – Britain, France, Germany, Russia and China. The US is an outlier since ex-president Donald Trump abandoned the deal in 2018 and imposed 1,500 devastating sanctions.

Optimism over the outcome has provoked hardliners in the US and Iran to blast the talks. While US senators Ted Cruz, a Republican, and Robert Menendez, a Democrat, have threatened to scupper the US’s re-entry, their threats ring hollow because Mr Biden can return by simply signing an executive order. The hawks would need to muster a two-thirds Senate majority to prevent the US’s return.

Blamed for subverting Iranian nuclear facilities, Israel has boosted pressure on US lawmakers to protest and announced it will not respect the deal, although several Israeli military and intelligence officers urge US return.

Iranian clerics have warned ultra-conservative president Ebrahim Raisi against co-operating with the United States, prompting him to state that Iran “never” pins hopes on the talks. However, the ultimate decider remains Ayatollah Khamenei who approved the deal in 2015 – as did then vice-president Biden.