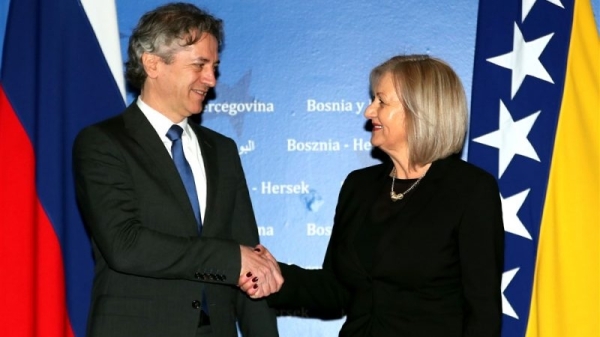 Israeli workers dismantle tents during a demolition operation of a Palestinian bedouin encampment in the area of Humsa, east of the village of Tubas in the north of the occupied West Bank. Photograph: Jaafar Ashtiyeh/AFP via Getty Images

Ireland, as a member of the UN Security Council, has called on Israel to halt the demolition and confiscation of Bedouin homes in the Jordan Valley.

Ireland, Estonia and Norway, along with permanent members of the Security Council, the UK and France, and former members Belgium and Germany signed the joint statement about the recent destruction of homes in Humsa Al-Bquai’a.

It is known as Area C, which is part of the West Bank, but remains under Israeli military control. The destruction affects 70 people including 41 children.

Speaking at the security council on Friday, Ireland’s ambassador to the UN, Geraldine Byrne Nason said Ireland was gravely concerned by the “repeated demolition of Palestinian homes and other structures in Humsa Al-Bqai’a and elsewhere. The rules of international humanitarian law prohibit the unnecessary destruction of private property, and Israel must immediately cease such practices.

“Israel as the occupying power also has obligations under international humanitarian law to allow and facilitate full and unhindered humanitarian assistance to those in need. The destruction and confiscation of humanitarian aid is unacceptable and causes harm and suffering to ordinary Palestinians.”

Israel has been confiscating temporary homes in the northern Jordan Valley since November claiming that they are illegally built. The homes are occupied by the Bedouin people who are largely nomadic. Israel has destroyed animal shelters, solar panels, latrines and tents.

Ms Byrne Nason said 53 Palestinian schools across the West Bank, including in East Jerusalem, were at risk of demolition.

She recalled that the Oslo Accords of 1993 provided for gradual transfer of Area C to Palestinian jurisdiction.

“Current Israeli actions and trends make this transfer increasingly difficult to envisage and have a real impact on the prospects and lives of Palestinians, especially young Palestinians,” she stated.

“Persistent acts of violence as well as movement and access restrictions and violations of international humanitarian and human rights law damage trust between Israelis and Palestinians and within their own communities; making a peaceful settlement more difficult to achieve.”

Israel claims the area is a firing range and Palestinians cannot build structures in the area without permits.

In the joint statement the seven European countries said the recent incidents “confirm once again the regrettable trend of demolitions and confiscations since the beginning of 2020.

“We recall our firm opposition to Israel’s settlement policy and actions taken in that context, such as forced transfers, evictions, demolitions and confiscations of homes and humanitarian assets, which are illegal under international law, including the Fourth Geneva Convention, and are an impediment to a viable two-state solution.”