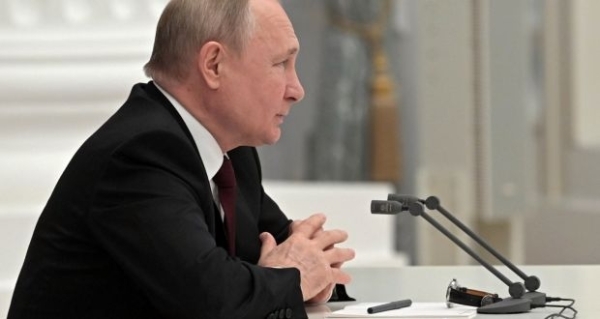 Russian president Vladimir Putin told the leaders of France and Germany on Monday that he planned to sign a decree recognising the two breakaway regions in eastern Ukraine as independent entities shortly, the Kremlin has said.

The French and German leaders voiced disappointment after hearing the decision, the Kremlin said in a readout of the phone calls. Moscow’s move in relation to the regions held by Russian-backed separatists is also likely to torpedo a last-minute bid for a summit to prevent Russia from invading Ukraine.

The developments fit a pattern repeatedly predicted by Western governments, who accuse Russia of preparing to fabricate a pretext to invade Ukraine by blaming Kyiv for attacks and relying on pleas for help from separatist proxies.

Washington says Russia has now massed a force numbering 169,000-190,000 troops in the region, including pro-Russian rebels in eastern Ukraine.

Russia denies any plan to attack its neighbour, which broke away from Moscow’s rule with the collapse of the Soviet Union in 1991. But it has threatened unspecified “military-technical” action unless it received sweeping security guarantees, including a promise that Ukraine will never join NATO.

European financial markets tumbled at the signs of increased confrontation, after having briefly edged higher on the glimmer of hope that a summit might offer a path out of Europe’s biggest military crisis in decades. The price of oil — Russia’s main export — rose, while Russian shares and the rouble plunged.

At a televised meeting of his Security Council, which normally meets behind closed doors, Putin restated Russia’s demands, insisting that it was not enough for the West to say Ukraine was not ready to join NATO at present. He also said he would make a decision “today” on the request made a few hours earlier by the leaders of the Luhansk and Donetsk regions, which broke away from Kyiv’s control in 2014.

Shelling has intensified since last week along a long-simmering frontline between the rebels and Ukrainian forces in east Ukraine. On Friday the rebels abruptly started bussing out tens of thousands of civilians to Russia, accusing Kyiv of planning an attack, which Ukraine denies as propaganda.

Ukraine and the West consider the rebels to be Russia’s proxies, and have been warning for weeks that Moscow might use them to construct a case for war. Washington says it is absurd to suggest that it would be Kyiv that is choosing to escalate now, with Russian troops massed at its border.

Meanwhile. officials in Kyiv said shelling on Monday by separatists in eastern Ukraine killed two troops and one civilian, and wounded four soldiers.

The televised security council meeting in Moscow allowed Putin and his top advisors to outline their case. Dmitry Medvedev, the Security Council’s deputy chairman, told the meeting it was “obvious” that Ukraine did not need the two regions, and that a majority of Russians would support their independence. Russia already offers passports to residents of the two regions and Medvedev said there were now 800,000 Russian citizens there.

Defence Minister Sergei Shoigu appeared to raise the stakes even further by saying that Ukraine — which renounced nuclear weapons after independence from the Soviet Union — had a greater “nuclear potential” than Iran or North Korea.

The airlines Lufthansa, KLM and Air France all cancelled flights to Kyiv.

Hours earlier, French President Emmanuel Macron gave hope of a diplomatic solution, saying Putin and his US counterpart Joe Biden had agreed in principle to meet.

Putin said Macron had told him Washington had changed its stance on Russia’s security demands, without specifying how. The White House said Biden had accepted the meeting “in principle” but only “if an invasion hasn’t happened”.

Washington, which heads the NATO alliance, has flatly rejected the idea of excluding Ukraine for good or reversing NATO’s eastward enlargement of the last three decades, but has offered talks on weapons deployments and other security issues.

Kremlin spokesperson Dmitry Peskov said a call or meeting between Putin and Biden could be set up at any time, but there were no concrete plans yet for a summit.

Macron’s office and the White House said details would be worked out by US Secretary of State Antony Blinken and Russian Foreign Minister Sergei Lavrov later this week.

Lavrov confirmed he planned to meet Blinken in Geneva on Thursday, and said there had been some progress in talks with the West on security.

Blinken has said any meeting would be called off if Russia invades.

‘No one can resolve our issue without us’

Ukraine said it must be included in any decisions aimed at resolving the crisis, and that it had seen warnings online that hackers were preparing to launch cyberattacks on government agencies, banks and the military on Tuesday.

“No one can resolve our issue without us,” top security official Oleksiy Danilov told a briefing.

Russia’s military said a group of saboteurs had crossed the frontier from Ukraine near the Russian city of Rostov on Monday morning, followed by two armoured vehicles coming to evacuate them. It said five members of those forces had been killed when Russian forces repelled them. Ukraine said the report was fake news, and that no Ukrainian forces were present in the Rostov region.

Western countries say they are preparing sanctions that would hit Russian companies and individuals. People familiar with the matter said these could include barring US financial institutions from processing transactions for Russian banks.

Ukraine has called for sanctions to be imposed right away, saying to wait for an invasion would be too late. But the United States and Europe have said they will not act before an invasion, as the threat of sanctions should be a deterrent.