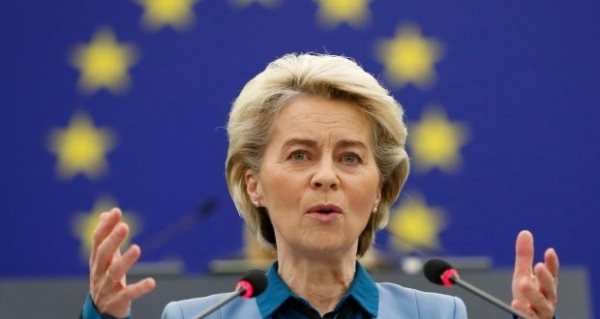 The European Union must continue negotiations with Russia while preparing its ability to respond in case of an invasion of Ukraine, the bloc’s senior diplomat has told the European Parliament.

It comes as Moscow signalled that some of its troops were withdrawing from positions where they have amassed around the borders of the former Soviet state.

High Representative of the European Union for foreign affairs and security policy Josep Borrell told MEPs in Strasbourg on Wednesday that it was important to continue to participate in negotiations while also preparing the EU’s capacity to respond in the event of an invasion.

“We don’t know what Putin is going to do. But what is clear is that we have to continue offering both,” he said.

“We’re looking at sanctions and these are being drafted together with the help of the European Commission… and obviously these will come into play if Russia invades Ukraine.”

Mr Borell said that while the EU was “ready to act” with sanctions against Russia, diplomatic negotiations should continue, “in order to look for a diplomatic solution to the worst crisis that Europe is living in since the end of the Cold War”.

President of the European Commission, Ursula von der Leyen, told the Parliament that Russia had sent “conflicting signals” over Ukraine.

“I truly hope the Kremlin will decide not to unleash further violence in Europe… But let’s stay vigilant. Despite yesterday’s news, Nato has not yet seen signs of any Russian troop reduction. Should the Kremlin choose violence, our response will be strong and united,” she said.

“Diplomacy has not yet spoken its last words and we saw signs of hope yesterday, but now deeds have to follow those words.”

She said the EU “must diversify our energy sources and must get rid of our dependency on Russian gas.”

Tell us your story

“They are clean and good for the climate, but they are also home-grown and good for our independence. That’s where our future lies.”

Nato defence ministers are set to meet on Wednesday in Brussels to discuss how to respond to the crisis, which has been described as one of the worst in Europe since the end of the Cold War.

The European Commission this week set out proposals to increase co-operation between EU members on defence, including with VAT incentives to encourage joint purchasing of military equipment to ensure good value and interoperability.

Meanwhile, Joe Biden has claimed that 150,000 Russian troops remain in a “threatening position” around Ukraine, despite Russian claims of a withdrawal, and warned that an invasion “remains distinctly possible”.

In a televised address from the White House on Tuesday afternoon, Mr Biden combined a repeated offer of security talks with a warning of severe repercussions if Russia carries out an attack that US intelligence has reportedly assessed could take place as early as Wednesday.

Ukrainian president Volodymyr Zelenskiy said earlier that Wednesday would be a “day of unity” for the country, urging people to fly flags and sing the national anthem at 10am.

In his speech, Mr Biden said he would “rally the world” to oppose Russian military action but made clear that the response would be primarily economic, saying: “I will not send American servicemen to fight in Ukraine.”

But he made clear that any attack on Nato territory or harm to Americans would be treated differently.

“We’re not seeking direct confrontation with Russia, though I’ve been clear that if Russia targets Americans and Ukraine, we will respond forcefully,” Mr Biden said. “If Russia attacks the United States or our allies through asymmetric means, like disruptive cyber-attacks against our companies or critical infrastructure, we’re prepared to respond.”

Earlier in the day, the websites run by the Ukrainian defence ministry, the armed forces and the country’s largest commercial bank, PrivatBank, and Oschadbank were closed down after a cyberattack. The Washington Post cited intelligence sources as saying the attack was probably the work of Russian government hackers, but the White House said it could not comment on attribution.

Ukraine’s data security agency said later that operations at the two banks resumed on Tuesday evening and that its national cybersecurity system was “taking all necessary measures to localise and resist the cyberattack”.

Pavlo Kukhta, a Ukrainian economist and adviser to the energy minister, said it was possible the hackers were preparing to target the country’s “vulnerable” power grid. “The goal is quite simple: to sow panic, show what they are capable of, test the systems and see if they are vulnerable,” the New York Times quoted him as saying.

Late on Tuesday, the UK foreign secretary, Liz Truss, criticised Russia’s refusal to participate in talks at the Organisation for Security and Cooperation in Europe (OSCE) that were called for by Ukraine, saying it demonstrated Moscow’s “contempt for the commitments it freely signed up to”.

“It is Russia that is the aggressor here,” she said in a statement. “The troops stationed on the border are clear threat to Ukraine. The UK and our allies urge the Kremlin to withdraw its troops and enter discussions based on the proposals put forward by Nato to improve transparency and reduce risk.”

Earlier on Tuesday, Vladimir Putin had claimed that a “partial” drawdown of Russian forces from the Ukrainian border.

Asked for the reason for the drawdown on Tuesday, Putin was not forthcoming. “It’s a partial withdrawal of troops from the areas of our exercises,” he said in response to a question during a press conference with the German chancellor, Olaf Scholz. “What is there to comment on?”

In his televised address, Mr Biden made clear the US was unconvinced by the Kremlin’s claims of a withdrawal.

“We have not yet verified that Russian military units are returning to their home bases. Indeed our analysts indicate that they remain very much in a threatening position,” the president said. “The fact remains right now Russia has more than 150,000 troops encircling Ukraine and Belarus and along Ukraine’s border. An invasion remains distinctly possible.”

Russia has always denied planning to invade Ukraine, saying it can exercise troops on its own territory as it sees fit. It has been pressing for a set of security guarantees from the west, including a guarantee that Ukraine will never join Nato. – Additional reporting from Guardian