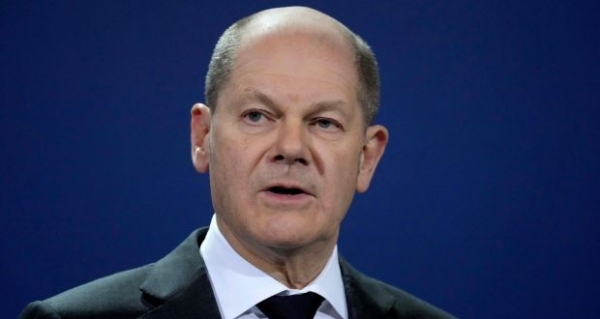 German chancellor Olaf Scholz: ‘The remarks that the vice-admiral made do not reflect the views of the federal government, which is why his demission was accepted.’ Photograph: Michael Sohn/Pool/AFP via Getty

Vice-admiral Kay-Achim Schönbach resigned on Saturday, ahead of his expected firing on Monday, after suggesting Ukraine would never regain the Crimean peninsula annexed by Russia in 2014.

“The remarks that the vice-admiral made do not reflect the views of the federal government, which is why his demission was accepted,” said Mr Scholz on Monday.

The departed navy chief’s remarks triggered fury in Ukraine and sparked fresh concerns about German attitudes towards Russia in general, and in particular inside the ruling Social Democratic Party (SPD).

As tensions continue to build on the Ukrainian-Russian border, Germany foreign minister Annalena Baerbock is closely involved in a dual western strategy of diplomacy and deterrence with Moscow.

But leading SPD figures, echoing the departed vice-admiral, have called for greater empathy with Russian concerns and greater efforts to demilitarise the looming conflict.

SPD parliamentary leader Dr Rolf Mützenich has accused Nato of a “singular fixation on military-political considerations”. He and others see themselves in the tradition of former SPD chancellor Willy Brandt, whose Ostpolitik of détente towards the Soviet union half a century ago eased Cold War pressures.

Meanwhile SPD centrists and Atlanticists have called for a tough line towards Moscow – even if it acts against Ukraine through separatists or other proxies.

Some German foreign policy experts suggest the vice-admiral’s remarks will only increase many alliance partners’ ambivalence towards Germany on Russian matters.

“It shows how great the division in the German elite is on its position vis-a-vis Russia and that the claims of the federal government on sanctions are worthless,” said Dr Stefan Meister of the German Council on Foreign Relations.

A key bone of contention remains the Nord Stream 2 pipeline, carrying Russian natural gas 1,200km under the Baltic sea directly to Germany and bypassing Ukraine and Poland as transit countries.

Repeated claims by leading SPD officials that the pipeline is a “purely commercial endeavour” was dubbed by one leading historian as a a “grotesque” indication of Germany’s “fundamental orientation problem” in its perception of Russia.

These efforts had assistance from Imperial Germany and sparked fury among smaller eastern neighbours who, then as now, see Russia’s shifting trade routes as an attempt to shift the balance of power in Europe

“Russia has risen to be a great power for raw materials in the European state system,” argued Prof Schulze Wessel in the Frankfurter Allgemeine daily. “Its role today in Europe and the world, as well as its revisionist power politics vis-a-vis Ukraine, have the same basis.”