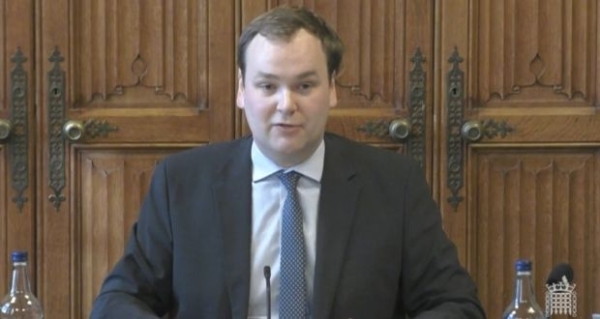 A senior Conservative MP has alleged that government ministers, whips and advisers have attempted to blackmail colleagues they suspect might oppose Boris Johnson, saying this could potentially be a police matter. Photograph: Parliament TV/PA Wire

A senior Conservative MP has alleged that government ministers, whips and advisers have attempted to blackmail colleagues they suspect might oppose Boris Johnson, saying this could potentially be a police matter.

William Wragg, the Hazel Grove MP who also chairs the public administration and constitutional affairs committee (PACAC), which looks into the work of government and the civil service, said whips had threatened to withdraw funding from the constituencies of MPs opposing Johnson.

Speaking at the start of a hearing of the PACAC, attended by Steve Barclay, the UK cabinet minister, and Alex Chisholm, the department’s most senior civil servant, Mr Wragg said he believed the actions breached the ministerial code.

“In recent days a number of members of parliament have faced pressures and intimidation from members of the government because of their declared or assumed desire for a vote of confidence in the party leadership of the prime minister,” he said.

“It is of course the duty of the government whips’ office to secure the government’s business in the House of Commons. However, it is not their function to breach the ministerial code in threatening to withdraw investment from members of parliaments’ constituencies which are funded from the public purse.

“Additionally, reports to me and others of members of staff at No 10 Downing Street, special advisers, government ministers and others encouraging the publication of stories in the press seeking to embarrass those who they suspect of lacking confidence in the prime minister is similarly unacceptable.”

“The intimidation of a member of parliament is a serious matter,” he added. “Moreover, the reports of which I’m aware would seem to constitute blackmail. As such it would be my general advice to colleagues to report these matters to the speaker of the House of Commons and the commissioner of the Metropolitan police. And they are also welcome to contact me at any time.”

Mr Wragg asked Mr Barclay and Mr Chisholm to convey his concerns to ministers and the civil service, which they said they would.

Angela Rayner, Labour’s deputy leader, said the alleged threats to withdraw investment to force support for Johnson were “disgusting”. She said: “These are grave and shocking accusations of bullying, blackmail, and misuse of public money and must be investigated thoroughly.”

Mr Wragg was one of the first Conservative MPs to call publicly for Johnson to go because of allegations about lockdown-breaching Downing Street parties, saying his position had become untenable.