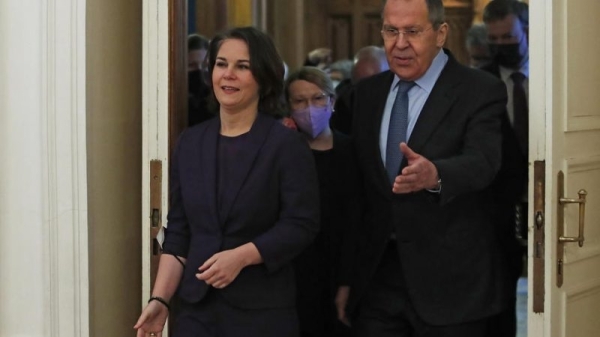 Baerbock stressed the need for dialogue and cooperation to de-escalate tensions on the Ukrainian border to her Russian counterpart Sergei Lavrov at a press conference in Moscow on Tuesday (18 January), continuing the tone of her official visit to Ukraine on Monday.

“Russia and Germany both play an important role in our common European house,” Baerbock said in Moscow. “We have a fundamental interest in stable relations,” she added.

Baerbock went on to underline that preserving the European peace order and respecting international rules “are the basis of our existence”.

The gathering of some 100,000 Russian troops on the Ukrainian border threatens to undermine this international order, as “it is hard not to perceive this as a threat,” Baerbock warned.

European leaders had recently stressed that any Russian military aggression towards Ukraine would lead to serious consequences.

Baerbock also expressed readiness to negotiate over the security guarantees demanded by Russia. “We are ready for a mutual dialogue,” the foreign minister said.

Lavrov, in turn, praised the good relations with Germany. “In many ways, however, these relations remain the scourge of anti-Russian lines in Brussels and a group of EU countries,” he added. 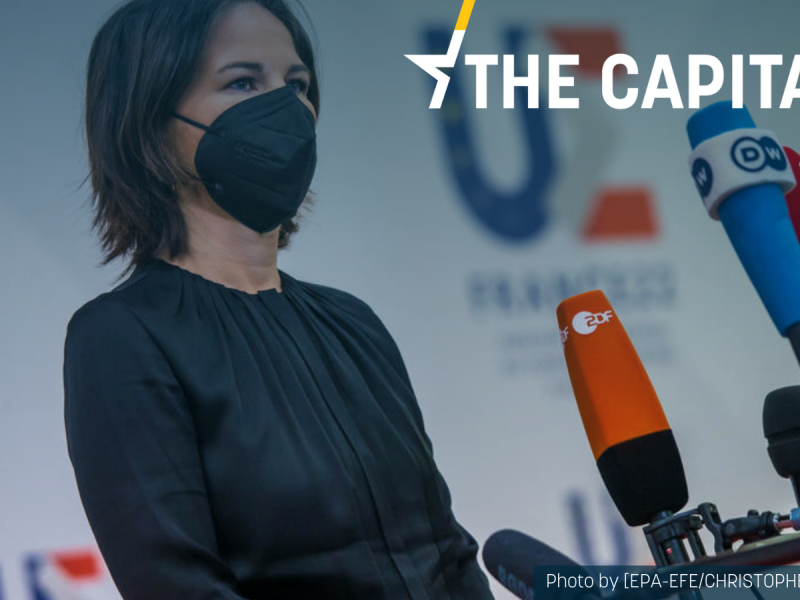 In today’s edition of the Capitals, find out more about the French parliament giving the vaccine pass the final OK, Sweden’s police on the hunt for a drone that flew over a nuclear plant, and so much more.

Lavrov also signalled readiness for talks under the framework of the Normandy format between France, Germany, Russia and Ukraine. It is now about “what steps need to be taken to ensure that this group of four helps to implement the Minsk agreements,” he said.

“It is good that everyone has committed to the Normandy format and the Minsk agreements,” Baerbock said, adding that a joint meeting was now being prepared. “That would be a big step for more security in Europe,” she remarked.

While the talks within the framework of the OSCE and NATO had already been a “meaningful step” towards enhanced dialogue, “it is now important from our point of view to breathe life back into the Normandy process,” Baerbock added.

Germany, France and the EU have advocated for reviving the format to ensure that the EU is not merely a spectator of the negotiations on the Ukraine conflict, but takes an active role.

EU chief diplomat Josep Borrell warned on Friday that Russia “has been acting over our heads as if we don’t exist”. 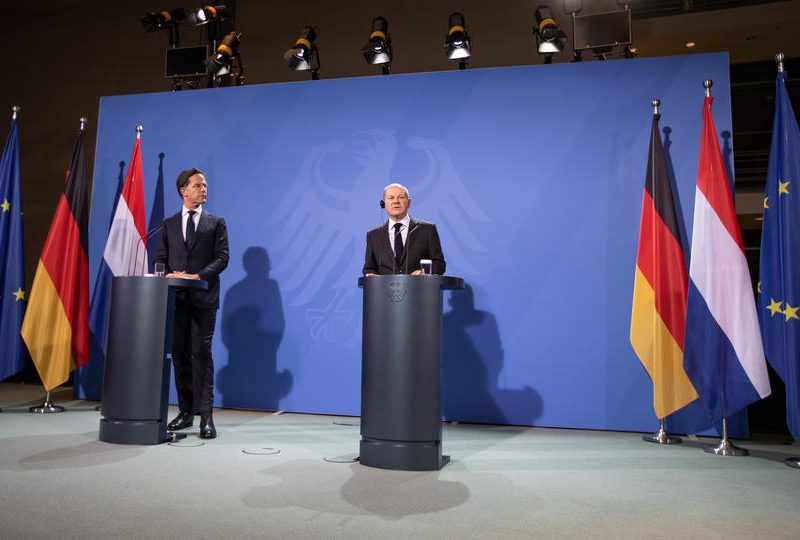 During the first visit of Dutch PM Mark Rutte to Berlin to meet with Chancellor Olaf Scholz, the two affirmed their agreement on issues like Ukraine, the fight against COVID-19, and economic transformation, but differed on nuclear energy. “We have …

Meanwhile, Baerbock sought close cooperation with Russia on the issue of climate protection.

“Without the world’s largest country, we will not be able to tackle the climate crisis,” she said. She went on to say that Russia had “enormous potential,” particularly with regard to green hydrogen and that there was indeed a need for closer cooperation in this area.

The topic was already on the agenda during her visit to Ukraine on Monday. Baerbock had announced that she would launch a “hydrogen diplomacy” office in Kyiv in order to kick-start projects as soon as possible. 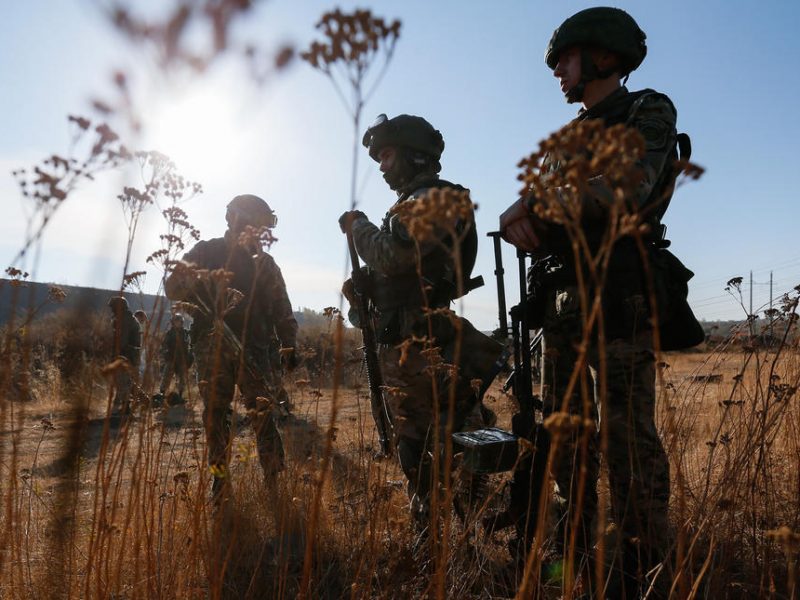 Amid tensions with Russia over Ukraine, the EU is set to enshrine stronger support, including in security and defence, for its Eastern partners, according to the latest version of the bloc’s upcoming military strategy document, seen by EURACTIV.

German Economy Minister Robert Habeck also commented on the situation in a press conference in Hamburg on the same day of Baerbock’s official visit to Ukraine.

“We have an aggravated situation […], the likes of which we did not have even in the Cold War,” he said. Habeck went on to raise the contentious issue of arms deliveries to Ukraine.

“Now the issue of arms deliveries is being decided within the framework of the NATO partnership, and that’s where it belongs,” the minister said. “There are some decisions made and that is the right framework,” he added.

Germany’s refusal to supply Ukraine with weapons to avert a potential attack by Russia had caused resentment among the ranks of the Ukrainian government. In particular, Ukraine’s ambassador to Berlin said over the weekend that he was “very disappointed” with the decision. 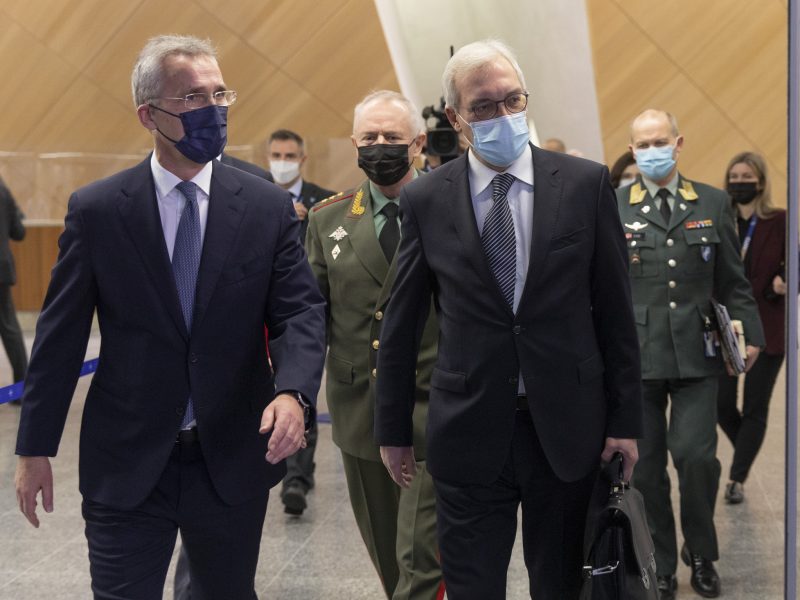 There are ‘significant differences’ between Russia and NATO over Ukraine that will be difficult to bridge, NATO chief Jens Stoltenberg said after roughly five hours of talks on Wednesday (12 January), where Moscow repeated its demands for European security guarantees.