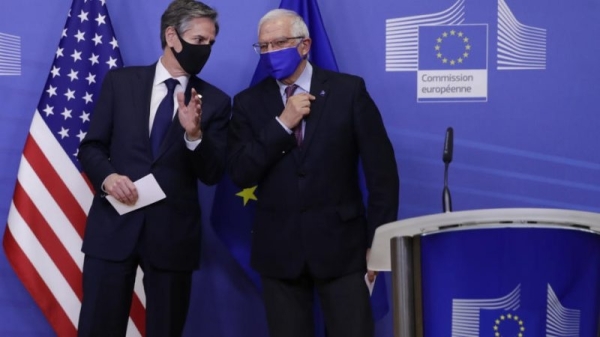 A previously touted US-EU dialogue on security and defence is set to be launched in early 2022, US Secretary of State Antony Blinken and the EU’s chief diplomat Josep Borrell announced in a statement on Friday (3 December).

First announced in their joint EU-US June summit, the first meeting is set to be held in early 2022, with the participation of the US Departments of State and Defense and the European External Action Service (EEAS) as well as the European Commission and the European Defence Agency (EDA).

The new forum is meant to formalise staff-level ties that have been growing between both sides of the Atlantic, director-general of the EU Military Staff, Hervé Bléjean, said previewing the announcement during a think tank event in Washington on Thursday (2 December).

According to Bléjean, possible areas for cooperation would include addressing cyber threats, climate change as well as joining efforts on disruptive technologies.

In their joint statement, Blinken and Borrell acknowledged “the importance of a stronger and more capable European defence that contributes to global and transatlantic security” and “confronting common security challenges, in line with the depth of our bond, common values, and shared interests”.

The step comes also at a time when the West’s tensions with Moscow are high over the situation at the EU’s border with Belarus and Russian troop build-up in and around Ukraine, and both the US and EU are adopting increasingly convergent views on the threat posed by China.

They also recalled the “need to develop coherent, complementary, and interoperable capabilities” and “support the fullest possible involvement of the United States in EU defence initiatives”.

Earlier in May, member states agreed to allow the US, Norway and Canada to join the bloc’s project on military mobility, seen as the ‘silver bullet’ for EU-NATO defence cooperation and designed to ensure seamless movement of military equipment across the EU in response to crises.

Last month, they also tasked the European Defence Agency (EDA) with beginning talks with Pentagon leaders about an agreement that would facilitate cooperation on joint military projects under the EU’s Permanent Structured Cooperation (PESCO).

While both diplomats welcomed the decision, they also expressed “a shared commitment to seek to conclude negotiations soon”.

PESCO currently includes a total of 60 joint military projects aiming to improve key EU defence capabilities over the next decade, including capabilities such as air, space, training capacities and drone technology.

According to defence experts, many of the projects could fill the same capability gaps NATO planners have so far identified and complement the military alliance’s capability building.

In September, European Commission President Ursula von der Leyen made a pitch for stronger European defence, saying the bloc needs to boost its own military capacity, but fell short of setting out clear proposals, particularly on how this would affect relations with NATO.

The EU side is currently also working on the so-called Strategic Compass, the bloc’s new military strategy document, and plans to convene a European Defence Summit in the first half of 2022, during the French presidency of the Council of the EU.

The push for European “strategic autonomy” got a boost during the Trump administration and picked up again after the US’s withdrawal from Afghanistan, and Biden’s surprise announcement, infuriating France, of an Indo-Pacific security deal with the UK and Australia.

In the wake of the Afghanistan crisis, EU member states discussed proposals for an initial entry force and the possibility to move towards ad-hoc military cooperation between interested EU member states, independently of the US and NATO if necessary.

However, the EU is facing a split on how far the bloc’s integration on security and defence should go, with predominantly Eastern European states concerned that the latest EU effort to develop weapons and forces could be in competition with the alliance.

Blinken and Borrell committed “to continue working jointly to raise the level of ambition for NATO-EU cooperation, in order to further strengthen this mutually reinforcing key strategic partnership”.

They also reaffirmed their “unwavering support for robust NATO-EU cooperation”, commitments made in the organisation’s 2016 and 2018 joint declarations.

A new EU-NATO joint declaration, which was meant to be presented before the end of the year but will likely be delayed until the beginning of 2022, is meant to be a key compass for future cooperation.

“It is important to support and recognition of the US for EU defence autonomy and a sign that they are keen to work with us,” an EU official told EURACTIV.

“This is also a signal to all the sceptics who were dismissing EU strategic autonomy and defence as something in contradiction to US or NATO,” the official added.