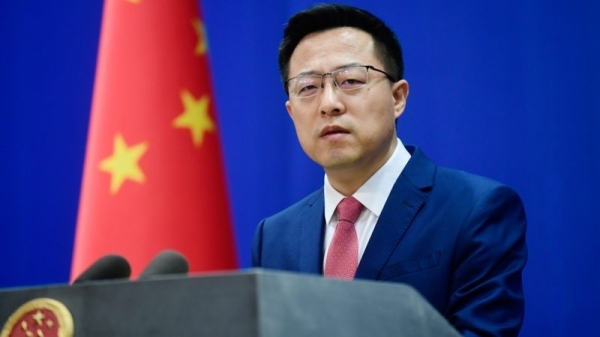 A fire at a migrant centre housing about 1,200 people in northwestern Bosnia on Wednesday (23 December) was probably set by migrants displeased with its temporary closure, police and a United Nations official said.

Police in the town of Bihac said the fire, which destroyed four large tents at the Lipa camp, was extinguished quickly. No casualties were reported.

Television footage showed flames and black smoke rising above the camp as migrants looked on. Some climbed the perimeter fence, carrying their belongings.

Fire broke out on Wednesday in a #migrant center in northwestern #Bosnia where about 1,200 people had been accommodated.????#Bihac #migrantcamp #migrants #refugees pic.twitter.com/ngxTqtEv8o

“The investigation is still ongoing but it’s certain the fire was set, probably by the camp residents,” police spokesman Ale Siljdedic said by telephone.

The Lipa camp was set to be shut on Wednesday for winter refurbishing, but Bosnia’s authorities have failed to find alternative accommodation for residents.

The migrants will join about 1,500 others sleeping rough in cold weather. About 10,000 migrants from Asia, the Middle East and North Africa are stuck in Bosnia, hoping to reach wealthier countries in the European Union.

“As far as we know now, a group of former residents put three tents and containers on fire after most of the migrants had left the camp,” Peter Van der Auweraert, head of the International Organisation for Migrations (IOM) that is running migrant camps in Bosnia, said on Twitter.

Most of the migrants headed for Bihac though authorities have closed migrant centres there and refused to reopen them, urging other parts of Bosnia to share the burden of the migrant crisis.

The United Nations mission in Bosnia expressed its concern over the lack of a political solution for the camp’s winter preparation, echoing warnings by the EU of a looming humanitarian crisis.