Albanian Prime Minister Edi Rama has arrived in Kosovo on Monday (27 September) to meet with Kosovo Prime Minister Albin Kurti and opposition party leaders, against the background of a dangerous escalation with Serbia over car plates.

Kosovo’s political parties have rallied together as Serbian troops gather along the border, following an alleged attack on two Kosovo interior ministry offices on Saturday.

Two buildings belonging to the Ministry of the Interior were attacked with hand grenades and set on fire, according to police.

The incidents came following days of tensions after the Kosovo government, led by Prime Minister Albin Kurti, announced that all Serbian vehicles crossing the border must use temporary Kosovo license plates.

Drivers from Kosovo have been required to display temporary Serbian plates since 2008 when it declared independence from Serbia. Kurti claims this is reciprocity, and he will revoke the measure if Serbia does the same.

Belgrade does not recognise Kosovo’s unilateral declaration of independence and sees Pristina’s decision on the licence plates as implying its status as a sovereign state.

Following the announcement, Serbs from the north of Kosovo blocked two main roads near the border with Serbia. These blockades have remained in place for over seven days and have been joined by Serbian military aircraft infringing on Kosovo’s air space, and tanks.

“After the provocations by the (special police) units… Serbian President Aleksandar Vucic gave the order to heighten the alert for some Serbian army and police units,” the defence ministry in Belgrade said in a statement.

In a rare sign of unity, the Democratic Party of Kosovo has pledged support for the Kurti Vetevendosje government. Leader Memli Krasniqi, along with leader of the Alliance for the Future of Kosovo Ramush Haradinaj, condemned the actions of Serbia.

Krasniqi wrote on Facebook that preserving the state of Kosovo “is a moral responsibility, not only political”, adding that Kosovo will not give in to threats of intimidation.

Former Prime Minister Haradinaj spoke in support of the actions undertaken by the Kosovo police along the border. He called Belgrade’s actions “provocations” and asked the EU to intervene.

On Saturday night, Kurti convened the National Security Council, and President Vjosa Osmani announced she would cut short her trip to the US and return to Kosovo in light of the ongoing situation. 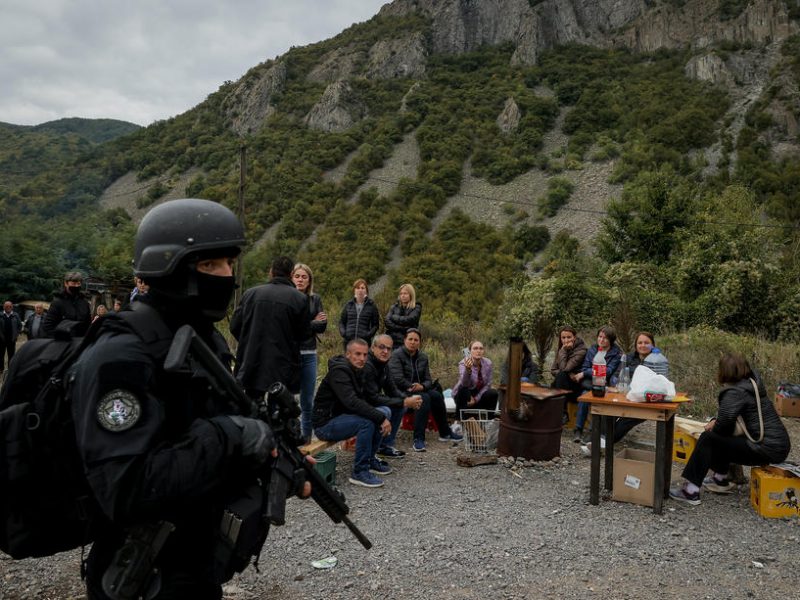 EU top diplomat Josep Borrell told both Serbia and Kosovo on Sunday that any new provocations or unilateral and uncoordinated actions “are unacceptable” and said he was continuing to closely follow developments in northern Kosovo. Meanwhile, US Deputy Assistant Secretary …

“Any further provocations or unilateral and uncoordinated actions are unacceptable,” he said in a statement.

European Council President Charles Michel called for both sides to “step back and de-escalate” on Saturday. He asked for the withdrawal of Special Police Units and barricades in favour of continuing dialogue.

NATO Secretary-General Jens Stoltenberg said he had spoken by phone to the Serbian president and Kosovar Prime Minister Albin Kurti.

“It’s vital both Belgrade and Pristina show restraint and return to dialogue”, he tweeted.

NATO troops have been deployed in Kosovo since the 1998-99 Serbian-Kosovar conflict.

Albania has a big influence in Kosovo, but Rama and Kurti have a somewhat fractious relationship, mainly due to the latter’s refusal to join the Open Balkans Initiative, launched by Albanian, Serbian and Macedonian leaders. It aims to establish a common economic area in the Western Balkans, but Kurti maintains it does not recognise Kosovo’s sovereignty and will undermine potential EU integration.

The Serbian president said the normalisation process can resume only if Kosovo withdraws the special police forces from the north of Kosovo, mainly populated by minority ethnic Serbs, who reject the authority of the government in Pristina.