The Brief, powered by FACEBOOK – Bluff, bravado and a fragile border 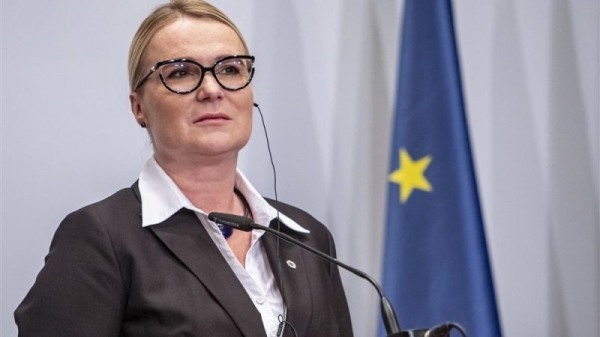 Divorces tend not to bring out the best in people and the UK’s divorce from the EU continues to produce some pretty unedifying behaviour and foolish bravado.

After two months of watching businesses struggle with new paperwork and customs requirements under its new trade arrangements with the EU, Boris Johnson’s government now says it will unilaterally extend the grace periods during which goods travelling across the Irish Sea are not subject to EU customs checks.

The EU, unsurprisingly, says that this breaches the new trade agreement and the Northern Ireland protocol, which keeps the province in the EU single market for goods.

If all this sounds familiar it is because a near carbon copy of this row occurred in the autumn when London threatened to give its ministers unilateral powers to override the Protocol. In another familiar pattern, after a show of bravado, the UK eventually backed down.

David Frost, one of Johnson’s closest allies and the new EU relations minister, has little love or respect for the EU. Frost clearly believes the European Commission will eventually cave, even though the evidence of the last five years suggests that bully-boy tactics don’t work with Brussels.

There’s no reason to believe that the two sides could not have reached a compromise on the grace periods. That now seems all but impossible.

The question is where Frost and his Conservative party want to go with this. They would dearly love to scrap the Protocol. However, while Conservative and Unionist lawmakers have spent five years moaning about the Protocol – which was an almost inevitable consequence of Brexit – they have failed to come up with a workable alternative.

Meanwhile, the group representing Northern Ireland’s loyalist paramilitary groups has renounced the Good Friday Agreement that has kept peace in the province for over twenty years, a reminder of just how serious the stakes are.

The EU is not going to agree to abandon the Protocol and, in any case, how can it now justify making more concessions to a partner who keeps welshing on things it has only just agreed to?

It is more likely that, if it came to the crunch, the EU would simply suspend the trade accord, even though that would leave both sides poorer and create even more red-tape for businesses and consumers.

Granted, the EU has not helped itself. Frost and co would certainly not be so confident if the Commission had not sought, albeit briefly, to impose border controls on coronavirus vaccines. Knee-jerk reactions have a nasty habit of producing unintended consequences.

The reality is that the Trade and Cooperation Agreement is very young and very fragile. It has only been provisionally ratified, and on Thursday, the European Parliament’s political group leaders declined to set a timetable for ratification.

Ever the bluff optimist, Johnson says that “goodwill and common sense” will solve the row. He could start by showing some himself.

Before you head into your weekend, make sure to have a read of our latest editions of the Global Europe and Digital Brief.

An EU reinsurance scheme to support national unemployment benefits was not part of the European Pillar of Social Rights Action Plan, although the European Commission has been supportive of the idea.

The action plan for a European Pillar of Social Rights will mark the next decade of European policies, European Commission advisor on social rights José António Vieira da Silva has said.

Hungarian Prime Minister Viktor Orbán called for the creation of a new European right-wing force for “our type of people” who want to protect their families and homeland.

The European Union warned China that it may take “additional steps” in response to Beijing’s move to grant itself a veto over the selection of Hong Kong lawmakers.

Lawmakers have denounced a “loophole” in the European Commission’s proposed climate target for 2030 and pointed the finger at the EU executive for its hard negotiation style over the EU climate law.

The European Court of Auditors (ECA), which monitors EU spending and management, announced that it is launching an audit to assess whether the European Commission took sufficient steps to ensure air passenger rights were upheld during the COVID-19 pandemic.