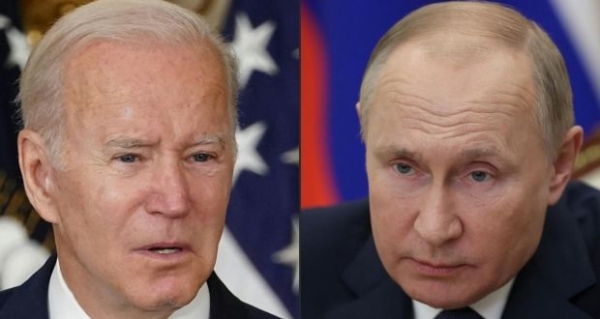 Russia has suggested that talk of a summit between Vladimir Putin and the US president, Joe Biden, is premature, saying the two leaders could arrange a call or meeting at any time but there were no concrete plans for an imminent high-level encounter.

The Kremlin spokesman Dmitry Peskov said on Monday tensions over Ukraine were rising but diplomatic contacts remained active, adding that the Russian president would soon address a special session of Russia’s security council.

The comments came after the Élysée Palace announced that Mr Biden and Mr Putin had agreed in principle to a summit aimed at de-escalating the crisis after two calls between the Russian leader and French president, Emmanuel Macron, on Sunday.

Mr Peskov said Mr Putin and Mr Macron held a second call at about 1am on Monday in which the leaders “emphasised the need to continue dialogue between foreign ministries and political advisers” on the Ukraine situation.

“Contacts between Russia and France at foreign minister level are also possible in the near future,” he added. He said Mr Putin and Mr Biden could meet if they felt it necessary, but stressed it was “premature to talk about specific plans” for a summit.

“The meeting is possible if the leaders consider it feasible,” Mr Peskov said after a flurry of last-ditch diplomacy by Mr Macron over the weekend in which he spoke to Mr Putin, Mr Biden, Boris Johnson and the Ukrainian president Volodymyr Zelenskiy.

Mr Peskov said US media reports that Russia had drawn up a list of Ukrainians to capture or kill after an invasion were an “absolute lie” and described as “highly unusual” a warning from the US embassy to Americans in Russia that they should prepare plans to leave the country if necessary.

Ukraine’s foreign minister on Monday welcomed the French summit proposal, saying Kyiv hoped it would result in Moscow pulling back its estimated 150,000 troops massed along the border, averting a Russian invasion that US and other officials have said could begin at any moment.

“We welcome this initiative. We believe that every effort aimed at a diplomatic solution is worth trying,” Dmytro Kuleba said in Brussels before a meeting with his EU counterparts. “We hope the two presidents will walk out from the room with an agreement about Russia withdrawing its forces from Ukraine.”

Mr Kuleba also called for the EU to start imposing sanctions on Russia “now” to deter Mr Putin from attacking. “We believe that there are good reasons . . . to impose at least some of the sanctions now to demonstrate that the EU is not only talking the talk about sanctions, but also walking the walk,” he said.

France’s foreign minister, Jean-Yves Le Drian, who was also in Brussels on Monday morning, said he would hold talks with his Russian counterpart, Sergei Lavrov, later in the day, while the German chancellor, Olaf Scholz, will call Mr Putin later in the day, the Russian state news agency Ria-Novosti reported.

Mr Macron’s office said on Sunday that in parallel with talks to secure a ceasefire on the ground in the enclave in eastern Ukraine held by Moscow-backed separatists, the president had proposed the Putin-Biden summit and both were open to the idea.

The summit would go ahead, however, only “on the condition that Russia does not invade Ukraine”, the Élysée said. France’s minister for European affairs, Clément Beaune, said on Monday there was still hope for a diplomatic resolution.

“If there is still a chance to avoid war, to avoid a confrontation and build a political and diplomatic solution, then we need to take it,” Mr Beaune told French television.

The White House has confirmed Mr Biden’s readiness to hold a summit providing no invasion had taken place, but made clear it was wary. “We are always ready for diplomacy. We are also ready to impose swift and severe consequences should Russia instead choose war,” the White House spokeswoman, Jen Psaki, said on Sunday night.

“And currently, Russia appears to be continuing preparations for a full-scale assault on Ukraine very soon,” she added.

Ukraine’s defence minister, Oleksiy Reznikov, said on Monday there was no sign of Russian forces withdrawing from the border, and that Moscow-backed rebels continue to shell Ukrainian positions.

“Since the beginning of this day, as of 9am, 14 attacks have already been recorded, 13 of them from weapons prohibited by the Minsk agreements,” he told reporters in Kyiv. “One of our soldiers was wounded. It’s a war crime. They want to provoke us so Russia has a pretext.”

Mr Reznikov said his troops had been given strict instructions not to fire back. He dismissed Kremlin claims that Kyiv was preparing an offensive to retake separatist territories in the east of the country as “fake”.

“Of course Russia can start an attack. I’m sure they have a plan like that. The Ukrainian military is ready to resist any scenario. We keep vigil,” he said at a press conference in Kyiv.

The new photos, taken on Sunday, appeared to show vehicle tracks cutting through snow-covered fields that are surrounded by woodland and bordered by roads, with several buildings also visible, indicating troop and equipment movement near three locations in southwestern Russia, Maxar said. – Guardian