US record for daily coronavirus cases is broken with average at 267,000 this week 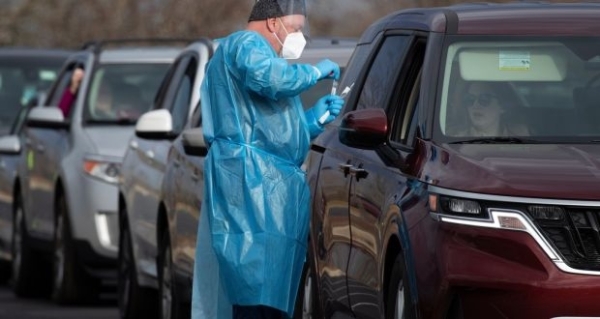 Omicron’s rapid spread has worsened a labor shortage, upending the hospitality, medical and travel industries, among others. Photograph: EPA/Michael Reynolds

The US record for daily coronavirus cases has been broken, as two highly contagious variants — delta and omicron — have converged to disrupt holiday travel and gatherings, deplete hospital staffs and plunge the United States into another long winter.

As a third year of the pandemic loomed, the seven-day average of US cases topped 267,000 on Tuesday, according to a New York Times database. The record came just a day after the Centers for Disease Control and Prevention reduced the number of days that infected Americans should remain isolated to five days, from 10. The CDC changed course as omicron’s rapid spread has worsened a labor shortage, upending the hospitality, medical and travel industries, among others. The agency did not recommend rapid testing before people left isolation and experts warned that omission risked seeding new cases and heaping even more pressure on already overburdened health systems.

The previous US daily cases record was set on January 11th, 2021, when the seven-day average was 251,232. That was during a catastrophic winter that was far worse than this moment, when more than 62 per cent of Americans are fully vaccinated. And early evidence, including some hopeful reports from South Africa, suggests omicron causes milder symptoms than other variants, with vaccinations and boosters helping prevent serious illness and death.

Hospitalisations have been rising, averaging more than 71,000 daily, but remain far below peak levels. While deaths have also been increasing, the daily average of 1,243 is a fraction of the record 3,342 reported on January 26th. Nevertheless, omicron has a considerably easier time than delta infecting vaccinated people. The onrushing cascade of patients threatens to overwhelm hospitals just as health care workers themselves are increasingly infected. A sizable number of patients remain infected with the deadlier delta variant. On Tuesday, the CDC reported that omicron cases made up a significantly lower percentage of the overall US caseload than was expected, at roughly 59 per cent. And for the week ending December 18th, the agency revised down its estimate of 73 per cent to about 23 per cent, meaning delta remained dominant until this week.

Omicron is undoubtedly becoming the dominant variant and that could be good news: A new laboratory study carried out by South African scientists showed that people who have recovered from an infection with the variant may be able to fend off later infections from delta.

Records are also being broken in Europe, but leaders of Britain, France, Spain and some other countries have resisted imposing harsh new restrictions, amid calls from some who argue that it is time to accept that the virus is endemic and that countries should move away from lockdowns. These nations, confronted with Covid fatigue, are betting for now that high vaccine and booster coverage, along with earlier restrictions still in place, will be enough to keep the coronavirus manageable.

The United States has also taken a similar path, as President Joe Biden has repeatedly said that the era of lockdowns is over and promised to increase testing, double down on vaccination campaigns and prop up hospitals. But public health experts have warned that the measures will not be sufficient to prevent soaring infections and hospitalizations over the next few weeks. And demand for tests has exploded while manufacturers are scrambling to increase production and distribution.

Testing is central to New York City’s plan to keep the largest US school district open in the new year. The city announced Tuesday that it will eliminate its policy of quarantining entire classrooms exposed to the coronavirus, and will instead use a ramped-up testing program to allow students who test negative and do not have symptoms to remain in school.

Omicron is hitting the US Mid-Atlantic region especially hard. Washington, Maryland and Virginia all broke records for daily case counts Monday. “D.C. is a marker for what we’re likely to see in much of the rest of the country,” Neil J. Sehgal, an assistant professor of health policy at the University of Maryland’s School of Public Health, said. “A tidal wave in omicron cases is likely to flood much of the country in the next month.

— This article originally appeared in The New York Times.