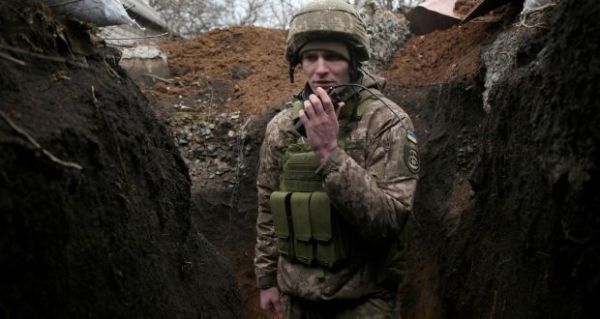 A Ukrainian serviceman on the front line with Russian-backed separatists, near Novolugansk, in the Donetsk region. Photograph: Anatolii Stepanov/AFP via Getty Images

Ukraine has denied planning to attack Moscow-led militants in the country’s eastern Donbas region who have started evacuating civilians to Russia, amid US warnings that the Kremlin is trying to fabricate a pretext for a major new invasion of Ukraine.

Air-raid sirens wailed in the militia-controlled city of Donetsk after separatist officials ordered women, children and the elderly to be bussed across the border to Russia after two days of increasingly intense shelling around the region. A similar order was issued in militant-held parts of neighbouring Luhansk province.

A senior militia member also said his car had been blown up on Friday evening in central Donetsk, further rattling nerves in a city that fell to the Russian-led separatists in 2014, at the start of a war that has killed 14,000 people.

Kyiv said Moscow and its proxies in Donbas were deceiving locals and trying to escalate tension at a time when Russia has massed more than 100,000 troops close to Ukraine’s borders, and is at an impasse with the West in security talks.

“We categorically refute Russian disinformation reports on Ukraine’s alleged offensive operations or acts of sabotage . . . Ukraine does not conduct or plan any such actions in the Donbas. We are fully committed to diplomatic conflict resolution only,” said Kyiv’s foreign minister Dmytro Kuleba.

Russian president Vladimir Putin said the situation in eastern Ukraine was “deteriorating” and accused Kyiv’s pro-western government of the “systematic violation” of the rights of Russian-speakers in Ukraine, a day before he was scheduled to oversee drills by his country’s nuclear forces involving ballistic and cruise missiles.

“All Kiev needs to do is sit down at the negotiating table with representatives of Donbas and agree on political, military, economic and humanitarian measures to end the conflict,” Mr Putin said after talks with his ally, Belarusian dictator Alexander Lukashenko.

Ukraine says only Russia, not its local proxies, can end the eight-year war in Donbas, and has urged Mr Putin to agree to fresh talks on the issue.

Mike Carpenter, US ambassador to the Organisation for Security and Co-operation in Europe, said Russia was “intent on creating a pretext to justify an invasion into Ukraine” and “probably has massed between 169,000-190,000 personnel in and near Ukraine”.

“This estimate includes military troops along the border, in Belarus, and in occupied Crimea; Russian national guard and other internal security units deployed to these areas; and Russian-led forces in eastern Ukraine,” Mr Carpenter said in a statement.

Russia insists it has no plans for a new attack on Ukraine, where it annexed Crimea in 2014, and says some of its troops are now returning to base after completing drills near its neighbour’s borders.

“In fact, we see more forces moving into . . . that border region,” US defence secretary Lloyd Austin countered on Friday.

“We also see them continuing to prepare by doing things that you would expect . . . if they were preparing an attack. It includes a number of things in terms of moving closer to the border, dispersal of troops, increasing logistical capabilities,” he said, adding that Russia seemed poised “to maintain the capability to launch an attack at any time”.