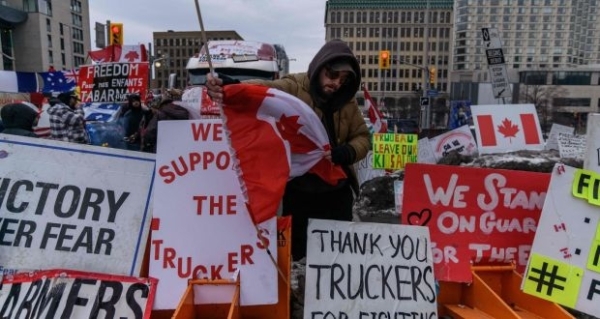 The protests began as a demonstration against public health measures including vaccine mandates, but have morphed into a broader anti-government movement. Photograph: Ed Jones/AFP via Getty

Police in Ottawa have warned they will begin breaking up blockades that have gridlocked traffic, angered residents and plunged Canada’s capital into a crisis that has rippled throughout the country.

For 20 days, protesters and large semi-trucks have blockaded sections of downtown Ottawa, including Parliament Hill, the seat of the country’s government.

The protests, which began as a demonstration against public health measures including vaccine mandates, have morphed into a broader anti-government movement as more fringe elements, including far-right and nationalist groups, became a growing presence.

On Wednesday, officers began handing out leaflets warning protesters to leave the area immediately or face the possible loss of their vehicle licenses.

The warnings by police were largely met with disdain: protesters tore up the leaflets or tossed them on the ground.

On Monday, the prime minister, Justin Trudeau, invoked legislation giving his government sweeping powers to end the “Freedom Convoy” protests. Ottawa’s deputy police chief, Steve Bell, said he believes the police now have the necessary reinforcements to bring the blockade to an end.

But the police’s failure to prevent the protests in the beginning, and then to rid the city of the trucks over a three-week period, has baffled and angered residents of Ottawa and on-lookers across Canada.

Ottawa’s police chief, Peter Sloly, resigned on Tuesday as the force admitted they have little to show for the 14 million Canadian dollars (€9.7 million)spent since the protests began.

“I’ve watched in disbelief as this carnival of chaos has been allowed to continue,” said Diane Deans, chairwoman of the Ottawa police services board, during a meeting on Tuesday.

Despite local bylaws prohibiting the transport of fuel, protesters brazenly wheeled wagons and modified sleds full of diesel and propane past police – a day after the federal government invoked the Emergencies Act.

The perceived apathy or impotence of the police when dealing with the convoy activists has also underscored what activists and academics say is a double standard in how officers respond towards protests led by indigenous or black people.

On Tuesday, video of Royal Canadian Mounted Police (RCMP) embracing protesters at a dismantled blockade in southern Alberta laid bare the stark contrast. Only months before, the RCMP faced criticism for beating anti-logging protesters, ripping off their masks and using pepper spray on them. And in September, Toronto police violently disbanded protests supporting people living in a homeless encampment.

Akwasi Owusu-Bempah, a sociology professor at the University of Toronto who specialises in policing and social inequality, said recent events showed police are capable of using restraint during protests.

“I know that that same level of restraint is not exercised at other times and with other populations,” he said. “There are some very clear differences between how a largely – although not wholly – white protest group is being policed here, and how, for example, black and indigenous people are policed when they’re exercising their right to peaceful protest,” he said.

But while class and race may play a role in the recent lack of enforcement in Ottawa, Owusu-Bempah suspects that broader national security concerns could be playing a role in decision-making.

Officials have said they suspect that some Ottawa protesters have access to weapons, prompting a cautious approach over fears of escalation and violence.

Earlier this week, police in Alberta seized a significant cache of weapons – including 13 long guns, handguns, body armour, a machete, a “large quantity” of ammunition, and high-capacity magazines – from a blockade near the border town of Coutts, Alberta, the same location where the video of the police embracing protesters was filmed. Four people were charged with the attempted murder of police officers.

But Hayden King, head of an indigenous-led policy thinktank, points out that indigenous protests are rarely treated with a similar level of deference.

“When it comes to indigenous demonstrations, there does seem to be a disproportionate amount of force used. It’s not uncommon to see reconnaissance, and snipers on rooftops,” said King, executive director of the Yellowhead Institute and a member of Beausoleil First Nation.

The protesters in Ottawa, as well as Coutts and those who blockaded the Ambassador Bridge last week, are overwhelmingly white.

While Ottawa’s erstwhile chief had taken the job with hopes of reforming police and emphasising the importance of de-escalation, King worries that the opposite outcome is more likely once the protests are inevitably broken up.

“I imagine that police will use this example as the justification for more funding, more militarisation. And once that happens, after the tractor convoy leaves Ottawa or Toronto or wherever it is, police will be left with these resources. And they’ll use them against indigenous people and against homeless encampments and black activists,” he said. “The consequence of all this will be increased militarisation of police, which will translate to even more disproportionate uses of force against indigenous people.” – Guardian