The role of gas in the energy transition should be reflected in the EU’s green finance taxonomy, according to the economy and energy spokesperson of Germany’s social democratic SPD party, which is expected to lead the next German government coalition.

Gas plays an important role in the transition to clean energy, which “should of course be reflected in the taxonomy,” said German SPD lawmaker Bernd Westphal at an event hosted by think-tank Agora Energiewende in Berlin.

The European Commission’s 2030 climate plan is rightly focused on energy efficiency and renewables, Westphal told EURACTIV on the sidelines of the event, held on 7 October.

But the role of natural gas as the last fossil fuel and a “bridge to the renewable age” requires recognition under the EU’s green finance rules, he added.

Natural gas can be used for example to reduce iron ore in the steel industry, Westphal said, explaining that “natural gas is half cleaner than steel production using coking coal in a blast furnace”.

“This also applies to the use of natural gas to generate electricity and heat. This requires a sensibly designed EU taxonomy, also with regard to the role of natural gas. For security of supply and competitive prices it is essential to use natural gas as the last fossil raw material as a bridge to the renewable age,” he said.

The SPD won the 26 September federal elections and are currently in negotiations with the Greens and the liberal FDP party to form a so-called “traffic light” coalition.

Gas will continue to play a central role in Germany’s energy transition as the country exits coal and nuclear power, said speakers at the Berlin event. In order to secure supplies, the country has agreed the construction of a new pipeline, Nord Stream 2, bringing Russian gas directly to German consumers.

“We will need 20 to 30 GW of new gas plants in Germany,” said the CEO of German energy company RWE, who spoke at the same event.

The EU’s green finance taxonomy introduces a labelling system for investment aimed at directing billions of euros to industries and companies that win a “sustainable” label for all or part of their activities.

The Commission published a first batch of implementing rules under the taxonomy in April this year, spelling out detailed technical criteria that companies need to comply with in order to win a green investment label in Europe.

The proposal covered 13 sectors but left out nuclear power and gas, for which a separate proposal is expected in the coming months.

The European Commission on Wednesday (21 April) unveiled a first batch of implementing rules under the EU’s sustainable finance taxonomy, spelling out detailed technical criteria that companies need to comply with in order to win a green investment label in Europe.

Germany is against the inclusion of nuclear in the EU’s green finance taxonomy but has adopted a softer stance on gas, with support from other EU member states. Last year, a group of 10 EU countries led by Poland threatened to veto the taxonomy because it didn’t include gas.

Policymakers say gas could play a role in the taxonomy as a “transition” fuel, provided that it replaces coal in power generation. “Natural gas will probably be necessary to shift from coal to sustainable energy,” said Frans Timmermans, the EU’s climate chief.

“The question we should be asking ourselves is this: under what conditions can gas be considered as helping the transition when it replaces coal, while ensuring supply security?” said Pascal Canfin, the chairman of the European Parliament’s environment committee.

The difficulty, he told EURACTIV, is to “avoid a ‘lock-in effect’ with natural gas over the long run” that would stymie the transition to renewables.

Whether in the European recovery plan or the just transition fund, Pascal Canfin says he is in favour of applying the EU sustainable finance taxonomy, which allows drawing a line between gas projects that merit public funding and those that don’t.

France, meanwhile, is leading a coalition of seven EU countries pushing for the inclusion of nuclear as a low-carbon source of energy under the taxonomy.

With Germany and Poland keen to see gas included in the taxonomy as a “transition” fuel, a grand bargain could be in the making that would see both nuclear and gas win some kind of recognition in the path to climate neutrality.

In its April communication on the taxonomy, the European Commission said it will adopt further guidelines under the taxonomy that “will cover nuclear energy” and “will also cover natural gas and related technologies as transitional activity”.

The timing of the proposal is still unclear though, with some expecting it in December.

It remains to be seen whether a new German government will be operational by then, as the SPD has previously expressed its commitment to finalise coalition talks before Christmas. 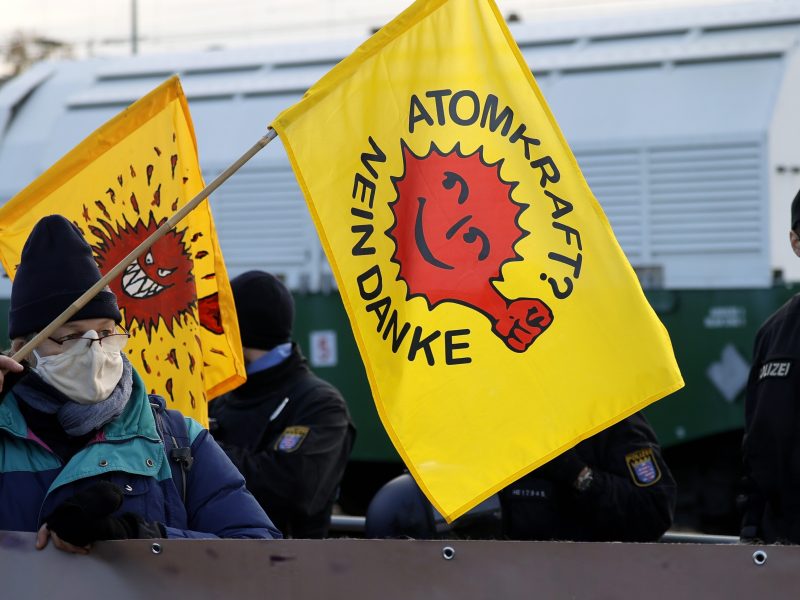 The inclusion of nuclear power in the EU’s green finance taxonomy is “the most likely” outcome in view of the scientific reports submitted to the European Commission in the past months, EU experts believe. But Brussels is not entirely decided yet and is seen playing for time before the German election this month.