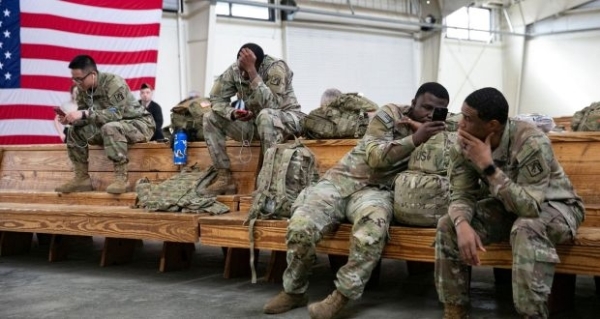 US service members wait at the Pope Army Airfield at Fort Bragg, North Carolina, on Thursday, before deploying to Europe. Photograph: Allison Joyce/AFP via Getty Images

So much for America’s shift from the Atlantic to the Indo-Pacific. By demanding concessions that have shocked a divided and rudderless Europe, Russian president Vladimir Putin has united the west behind US leadership.

It has been years since that sentence could be written with a straight face. Russia has brought about what it fears – a West that is displaying something approaching resolve. As a result, US president Joe Biden now finds himself on the front lines of two potential cold wars, one in eastern Europe, the other in the South China Sea.

This was not the script that Biden had planned on. He came to office promising to reorient US foreign policy to the east. To be sure, he said all the right things to America’s European partners, who were relieved to be treated as friends again after four years of belittlement by former president Donald Trump.

But they soon learned that Biden meant something different by “America is back” than what they wanted. Much like Trump, Biden was fixated on China. Unlike Trump, he wanted Europe to help him in this new Indo-Pacific focus.

Europe’s rude awakening began last summer when the US abruptly departed from Afghanistan without the agreement of its Nato allies. Much like the now-vanished Afghan National Army, America’s Nato partners relied on US air and logistical support to operate in Afghanistan. They were left thinking their opinion counted for little with Biden in spite of his warm rhetoric. The resulting debacle in Kabul left everyone bruised.

Biden compounded the sin by failing to warn the French about its new Australia, UK, US nuclear submarine deal, Aukus, a few days after the Taliban regained control of Afghanistan. If ever there was a moment for Russia to exploit western disunity, it was then. But Putin has overplayed his hand. In contrast to last summer, US officials have been assiduous in consulting and listening to their European counterparts.

Biden now faces two urgent challenges. The first is whether he can offer a way for Putin to climb down without losing face. The alternative is a conflict in Ukraine that could put the Balkans atrocities of the 1990s in the shade. With 40 million people, a majority of whom want to join Nato, Ukraine is no Bosnia or Croatia. It is twice the size of Germany and has a bigger population than Poland.

A more appropriate comparison would be the Spanish civil war in the 1930s when outside powers, fascist and communist alike, used proxy forces to fight each other. Even Putin would blanch at that.

This is where Biden’s diplomatic creativity will be tested, and may be found wanting. If, as the consensus in Washington holds, China poses the overwhelming strategic challenge to the US, Biden must eventually find a way to loosen Russia from China’s embrace.

Existential rhetoric about a global battle between autocracy and democracy will only drive Moscow closer to Beijing. It will also unsettle many of Biden’s newly reassured European allies. Some of them are uncomfortable with talk of Manichean contests between light and dark.

It is not as if Ukraine is a model democracy. According to the Washington-based Freedom House, Ukraine is only “partly free” and rates well below Hungary’s “illiberal democracy” and other flawed ones such as Serbia, Colombia and Sierra Leone. Ukraine only ranks slightly below India, which the Biden administration heralds as a democratic bulwark against authoritarian China.

If Biden prioritises this yardstick, his foreign policy is destined for confusion and accusations of hypocrisy. His language is also alienating relatively dependable friends such as Singapore and the United Arab Emirates – countries the US needs on its side.

The crisis in Europe offers Biden a clarifying exit from the rhetorical trap he has set for himself. The principle at stake is Ukraine’s sovereignty. Its borders should be no less inviolable were it to change its political system. The world would be a better place, of course, if democracy were flourishing everywhere. But recent history ought to have taught the US the risks of proclaiming its mission of universal freedom.

Almost everyone, on the other hand, can agree on the sanctity of borders. By threatening Ukraine’s sovereignty, Putin has done something Biden could not on his own – unite the West. It gives Biden an advantage that should not be squandered. – Copyright The Financial Times Limited 2022