At least 20 dead in Argentina after consuming tainted cocaine 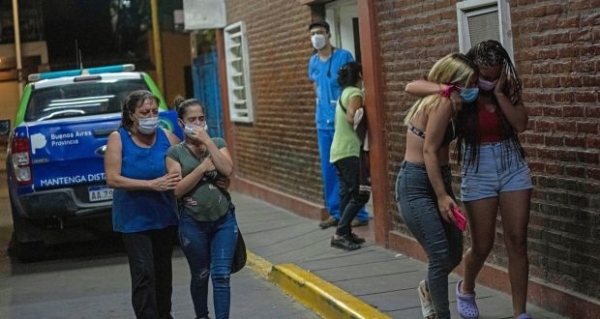 Relatives and friends of people who were poisoned with adulterated cocaine outside the emergency room of a hospital on the outskirts of Buenos Aires. Photograph: Rodrigo Abd/AP

Authorities in Argentina are scrambling to remove from circulation a batch of tainted cocaine that has already left at least 20 people dead and dozens more seriously ill in hospital.

Drug users have been warned the cocaine sold in the western suburbs of the capital Buenos Aires appears to have been mixed with an extremely toxic substance, possibly rat poison, and to turn any they may have bought over to investigators.

A series of police raids has already led to the seizure of more than 15,000 packages of cocaine ready for sale, though it is not clear if all of them are part of the batch that caused the deaths that were first reported on Wednesday.

“This is an exceptional event, we have no precedent. It appears to us that the [toxic] substance was included deliberately, that it wasn’t an error in production,” local prosecutor Marcelo Lapargo told the Clarín newspaper. One line of inquiry being pursued by investigators is that the drug was poisoned by local traffickers as part of a dispute over territory, though Mr Lapargo said this was just a hypothesis.

Argentina has gradually decriminalised possession of small quantities of drugs for personal use since a supreme court ruling in 2009. But trafficking is still illegal and in recent years the country has seen a steady rise in violent drug-related crime.

Early on Thursday police arrested at least seven members of a local drug gang in the greater Buenos Aires town of Tres de Febrero, where the contaminated drugs appear to have first been sold. They also recovered packets of cocaine ready for sale in similar packaging to those that caused the fatalities. Among those arrested was local trafficker Joaquín Aquino, who reportedly controls drug distribution in the slum neighbourhood of Puerta 8 in Tres de Febrero.

But in recent years traffickers in neighbouring Bolivia and Peru have taken advantage of lower levels of scrutiny of goods originating at the country’s ports to ship their product through them to Europe and North America.

The arrival of large transnational trafficking networks has in turn spurred the growth of a local drug culture and Argentina has gone from being merely used as a transshipment point to developing a major local market. The Inter-American Commission for Drug Abuse Control calculates it now has one of the highest per capita cocaine consumption rates in the western hemisphere.

This rise in turn has sparked an increase in drug related violence, particularly in the port cities of Buenos Aires and Rosario, the main hub of the country’s drug trade.