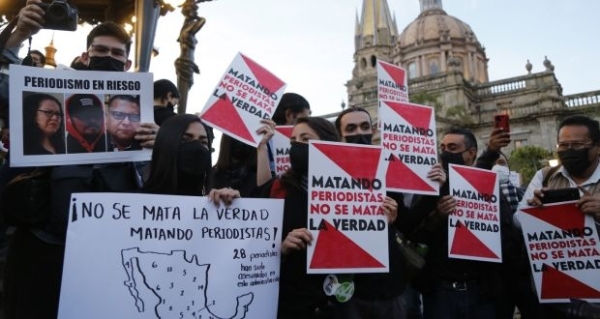 According to the Committee to Protect Journalists, nine journalists were killed in Mexico last year, making it one of the deadliest countries in the world for reporters, alongside India and Afghanistan. Photograph: Francisco Guasco/EPA

In a country where the brutal killings of journalists are almost routine, a recent spree of violent deaths has provoked a rare outpouring of public outrage among reporters and everyday citizens alike in Mexico.

Journalists in dozens of cities across the nation held vigils and demonstrations on Tuesday night, one of the largest mass protests over the murders of media workers in recent years after three of their colleagues were killed this month, two of them just days apart in the same city.

“It’s infuriating, it’s enraging, because journalists always give our soul, our heart, our body,” said Oscar Luna, who worked as a reporter for 10 years and attended a vigil in Mexico City. “From one moment to the next, they take away that passion, that commitment, that love, that dedication that you have toward journalism.”

The killings came in rapid succession. Alfonso Margarito Martínez Esquivel, a photographer who had worked with local and foreign media outlets, was killed outside his home in broad daylight on January 17th in the border city of Tijuana. Just days later, Lourdes Maldonado López, a veteran broadcast reporter who covered politics and corruption, was shot and killed inside her car, also in Tijuana.

“I’ve never felt this worry, not just for me, but a fear for others, for those people I’ve been working with for 20 years,” said Aline Corpus, a long-time Tijuana correspondent for one of Mexico’s national newspapers who attended a vigil in the city Tuesday night. “You feel like an easy target.”

The two Tijuana killings followed the murder of reporter José Luis Gamboa Arenas in the eastern port city of Veracruz on January 10th, according to the State Commission for the Attention to and Protection of Journalists. News reports said he was stabbed.

The string of killings has underscored the dangerous environment that media workers in the country face: According to the Committee to Protect Journalists (CPJ), nine journalists were killed in Mexico last year, making it one of the deadliest countries in the world for reporters, alongside India and Afghanistan.

“The brutal killing of Lourdes Maldonado is horrifying,” Jan-Albert Hootsen, CPJ’s representative for Mexico, said in a statement. “The ongoing brutality against the journalists in this country is a direct consequence of the authorities’ unwillingness and inability to combat the festering impunity that fuels these killings.”

Despite the violence against reporters in Mexico, President Andrés Manuel López Obrador has taken a combative stance toward the media

While the Latin American nation has experienced widespread violence in recent years, with more than 30,000 murders recorded last year alone, according to the Mexican government, journalists are regularly targeted with deadly precision, often in direct reprisal for their work. In many of those cases, the suspects include the authorities themselves.

The surge in attacks against media workers has left vast swaths of the country in an information blackout, said Leopoldo Maldonado, regional director of the media advocacy group Article 19. Maldonado has no relation to Maldonado López. “What we call zones of silence are being imposed. They’re spreading. They’re propagating like a pandemic,” he said.

Despite the violence against reporters in Mexico, President Andrés Manuel López Obrador has taken a combative stance toward the media, regularly calling out and attacking specific journalists and commentators. Last year, he began hosting a weekly segment in his morning news conferences called “Who’s who in lies of the week” to point out supposed falsehoods in the media.

Such open hostility toward the press from the most powerful figure in the country contributes to an environment where assaults on journalists are permissible, according to Maldonado. “You’ve got a president that speaks about the press, grades it or discredits it, but at the same time, not a lot is being done to prevent these kinds of atrocities,” he said. “The discrediting by the president is seen by others as permission to attack.”

This week, López Obrador struck a more conciliatory tone and promised a full investigation into Maldonado López’s killing. “We are obliged to investigate this crime and prevent the murders of journalists and citizens from continuing,” he said during a news conference Tuesday. “That is why we work every day.”

As for the underlying causes of the killings, López Obrador adopted a familiar refrain during a news conference a day earlier, blaming previous governments for the country’s “corruption, inequality and violence” that his administration inherited.

But more than three years after taking office, some are beginning to lose patience with a president who was elected with a “hugs not bullets” slogan and a promise to curb violence.

“Most, if not all, the murders of journalists remain unpunished,” said Mr Luna, who was holding a sign that read “Hugs for the narcos, bullets for the journalists” at Tuesday’s vigil. “Nothing changes. Three years of a new government, and nothing changes,” he added.

Days before her killing this month, a federal labour court ruled in favour of Maldonado López, ordering the seizure of several of the TV stations’ assets for compensation

The killing of Maldonado López has felt particularly stinging to some because she had warned the president during a news conference in 2019 of the danger she was facing because of a labour dispute with her former employer, a local television station.

“I’ve come also to ask for your support,” she said. “Because I’m even in fear for my life.” The station is owned by the former governor of Baja California state, Jaime Bonilla, who is a member of López Obrador’s Morena party. Maldonado López had filed a lawsuit against the company for unpaid compensation she said she was owed after being unjustly fired from the station in 2013.

Days before her killing this month, a federal labour court ruled in favour of Maldonado López, ordering the seizure of several of the TV stations’ assets to compensate the veteran reporter, according to local media reports. Bonilla has denied any involvement in Maldonado López’s death. Back in 2019, López Obrador said he would ask his spokesperson to help Maldonado López in the case. This week, the president urged caution.

“You can’t just automatically link a labour dispute to a crime; it’s not responsible,” he said Monday. “We have to do a thorough investigation.” – This article originally appeared in The New York Times