Iran tries to turn Qassem Soleimani into a national hero 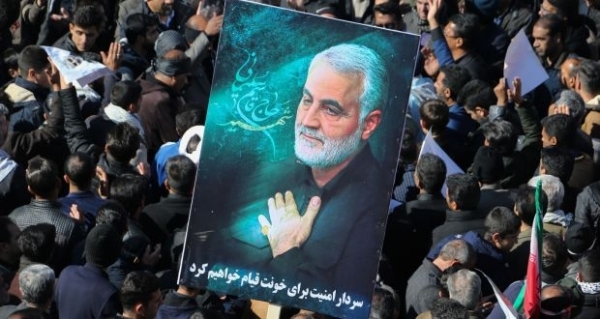 Iranian mourners gather during the final stage of funeral processions for Qasem Soleimani, in his hometown Kerman in January 2020. Photograph: Atta Kenare/AFP via Getty Images

On a bus for a “pilgrimage” to the grave of renowned Iranian commander Qassem Soleimani, Hoda overheard others discussing what they would pray for when they reached “the holy site”.

Their words made clear to the 33-year-old photographer that more than two years after Iran’s most powerful military commander was killed in an American drone strike in Baghdad, Soleimani had acquired legendary, almost saintly, status in Iran.

“Nobody suggests Soleimani is infallible but it felt like being in a shrine. It was calm and spiritual and you could see all types of people there – modern or religious,” said Hoda, who travelled to the site in the southeastern city of Kerman this month.

“I cried there. I realised only after his death what a sincere, powerful man he was and how he sacrificed his life to defend us.”

Decades after the 1979 Islamic revolution, Tehran is struggling to win over to its revolutionary cause younger generations who are critical of domestic corruption and poverty. Iran’s leaders hope to re-energise pro-regime forces through the glorification of Soleimani, a man from a modest background lifted by the revolution to become an important military figure.

Soleimani – who was the Revolutionary Guards’ commander for overseas operations, notably training militias in Iraq, Syria, Lebanon and Afghanistan – has not been linked to any corruption scandals. He also has a history of supporting women, referring to them as “my daughters” – even those such as Hoda, who wore a purple hoodie to his grave and does not adhere to strict Islamic dress codes.

In early January, the Islamic republic organised a “week of resistance” to mark his “martyrdom”. It put up huge banners of Soleimani and said it provided free accommodation and food to up to 250,000 “pilgrims” to his grave. Cinemas showed a Soleimani documentary for free. Thousands of supporters gathered in the capital, Tehran, to mark the January 3rd anniversary of his assassination, and were joined by hardline president Ebrahim Raisi who vowed revenge on US politicians.

“The anniversary of Soleimani is being used as fresh blood to help keep up the revolutionary mood and attract new young loyalists,” said a reformist political analyst.

“The Islamic republic cannot push for its ideals and celebrate its founders through commemorating the revolution anniversary [in February] for 10 days any more. But Soleimani is an updated story and is the only senior figure directly killed by the US, which adds to his prominence.”

The show of revolutionary fervour at home has been matched by muscle flexing in the region. In the first week of January, coinciding with the Soleimani anniversary, suspected Iranian-backed militias in Iraq and Syria launched a string of attacks against military bases hosting American troops. No Americans were killed. Iran also announced sanctions on 51 US nationals for their role in the death of Soleimani, as well as for “terrorism” and human rights violations.

The desire to make Soleimani a national hero takes place as Iranian diplomats and world powers meet in Vienna to resurrect the 2015 nuclear deal. So far there has been little progress. Iran says it will roll back its nuclear advances, made since former US president Donald Trump abandoned the deal in 2018 and reimposed sanctions, only if the US lifts all sanctions and guarantees no future government would pull out of the agreement.

With US sanctions biting hard, there have been regular street demonstrations by farmers, teachers, workers and even war veterans, civil servants and the retired in protest at poor economic conditions.

The marking of the anniversary has not been without controversy.

Five days after Soleimani’s killing, Iran retaliated by targeting an Iraqi military base. A few hours later, a Ukrainian passenger jet was shot down by Soleimani’s Revolutionary Guards shortly after taking off from Tehran airport. All 176 people on board were killed. The Guards blamed human error.

Families of the victims have staged public protests, urging senior military and security figures to be put on trial. They argue the plane was deliberately shot down in order to deter the US from attacking Iran.

“I’m not a judge but we have concluded that they shot down the plane to use it as a human shield . . . and then blame the US for it,” said Mohsen Asadi Lari, a former senior health official, whose two children were killed in the plane crash.

He and his wife – Zahra Majd, a university professor of medical science – said the guards’ top commander, Brigadier General Hossein Salami, suggested as much to them. “They said that if this plane had not fallen, a severe war would have occurred the next day. The US would have attacked [Iran] and the lives of perhaps 10 million people could be at risk,” she said. The guards said that the academic’s claims about Gen Salami were “untrue” and “distorted”.

Soleimani’s daughter, Zeinab, posed for a photo at the site of her father’s killing in Baghdad on the anniversary of the assassination. The fact she was holding the latest iPhone 13 riled many Iranians because imports of the phone are restricted in Iran as it is seen as a symbol of western consumerism.

For Hoda, Iran would be a better place to live today if Soleimani had not been killed. “He didn’t deserve to die naturally but it was too early for him to be martyred,” she said. “We needed him. I feel we have become lonely. Many miseries are happening to us because of his absence.” – Copyright The Financial Times Limited 2022