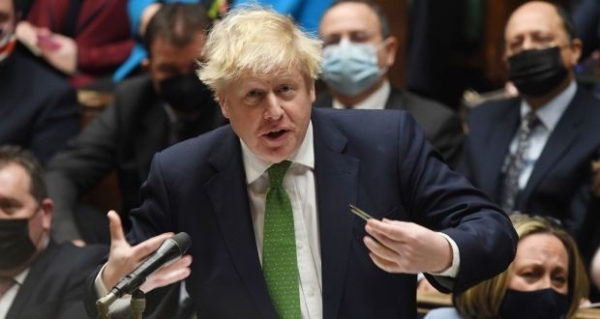 Boris Johnson arrived into the Commons chamber for prime minister’s questions to a welcoming roar from Conservative MPs, some of them thumping on the benches in front of them to amplify their approval. Moments before, Bury South MP Christian Wakeford had crossed the floor to defect from the Conservatives to Labour, a spectacle that appeared to galvanise many of his abandoned colleagues against him and behind the prime minister.

After a disastrous television interview on Tuesday, during which he looked defeated and almost broken, Johnson was on punchier form at the despatch box. He failed to answer Keir Starmer’s questions about his shifting position on Downing Street parties but each of his evasions won cheers from his own benches.

Even when the cheering was loudest, dozens of Conservatives declined to join in, among them former Brexit minister David Davis who sat on the bench farthest back with his arms folded. From time to time, he bobbed up to catch the speaker’s eye and when he did so the noisy backbenchers around him went silent.

“Like many on the government benches, I have spent weeks and months defending the prime minister against often angry constituents. I have reminded them of his success in delivering Brexit and the vaccines, and many other things. But I expect my leaders to shoulder the responsibility for the actions they take. Yesterday the prime minister did the opposite of that, so I will remind him of a quotation that will be altogether too familiar to him. Leo Amery said to Neville Chamberlain: ‘You have sat too long here for any good you have been doing . . . In the name of God, go’,” he said.

Davis was quoting from the May 1940 Norway debate which led to Chamberlain’s resignation and his replacement by Johnson’s hero Winston Churchill at a moment in history not obviously comparable to today’s. Chamberlain’s fall came because of his conduct of a war on which Britain’s future as an independent country depended; if Johnson loses his job, it will be on account of a few boozy parties in Downing Street.

By late afternoon, Wakeford’s defection and Davis’s dramatic intervention seemed to have had the perverse effect of slowing down momentum towards a no confidence vote in Johnson’s leadership. After reports of a surge of letters on Wednesday morning from Red Wall MPs calling for a vote, most Conservatives now wanted to waited until after senior civil servant Sue Gray’s report into the parties next week.

Johnson remains in a deeply perilous position, however, and Wakeford’s defection comes as a new poll for Channel 4 News suggests that the Conservatives would lose almost all their Red Wall seats if an election was held tomorrow. And Davis’s move is a reminder that opposition to Johnson comes from all parts of the party, including the prime minister’s old comrades in the battles over Brexit.