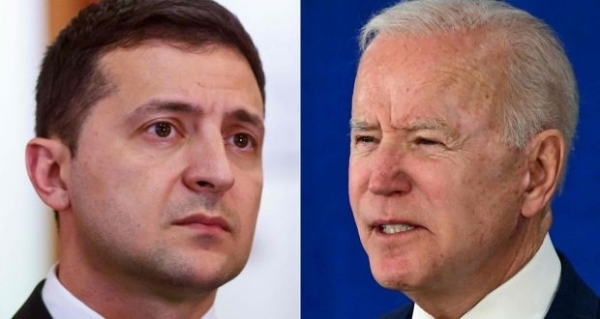 US president Joe Biden has held talks with Ukraine’s leader over the Russian troop build-up near the border, promising that the US and allies will act “decisively” if Russia invades.

Mr Biden and Ukrainian president Volodymyr Zelenskyy’s call came as the US and Western allies prepared for a series of diplomatic meetings to try to de-escalate a crisis that Moscow said could rupture ties with Washington.

“President Biden made clear that the United States and its allies and partners will respond decisively if Russia further invades Ukraine, ” White House press secretary Jen Psaki said in a statement following the call.

Ms Psaki added that Mr Biden underscored his commitment to the principle of “nothing about you without you”, the tenet that it will not negotiate policy that impacts Europe without its allies’ input.

Mr Biden has spoken of hitting Russia with economy-jarring sanctions if it moves on Ukraine’s territory, but he said last month that US military action is not on the table.

The Kremlin has demanded that any further expansion of Nato exclude Ukraine and other former Soviet countries.

The Russians have also demanded that the military alliance remove offensive weaponry from countries in the region.

The White House has dismissed Russia’s demands as a non-starter. A key principle of the Nato alliance is that membership is open to any qualifying country and no outsider has veto power.

While there is little prospect that Ukraine would be invited into the alliance any time soon, the US and its allies will not rule it out.

The United States has made little progress in efforts to persuade Russian president Vladimir Putin to ease tensions.

Senior US and Russian officials are scheduled to meet on January 9th-10th in Geneva to discuss the situation.

Those talks are to be followed by meetings at the Nato-Russia Council, and at the Organisation for Security and Co-operation in Europe. – AP