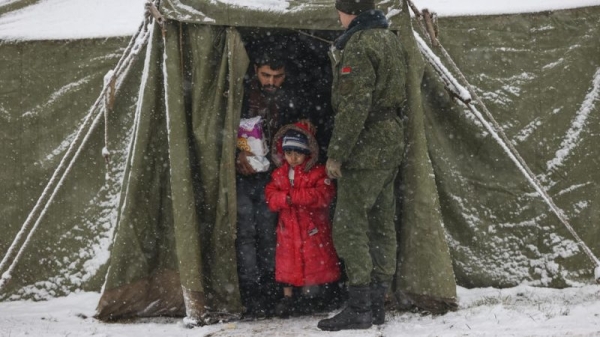 One of the more alarming discoveries by US law enforcement on the day the US Capitol was stormed were two pipe bombs found outside the Washington headquarters of the Republican and Democratic parties.

With just a week until America’s political elite will reassemble at the Capitol for Joe Biden’s inauguration, federal investigators have acknowledged they have no idea who planted the explosives – or why they failed to detonate.

The inability to identify the individuals behind some of the most martial acts during last week’s attack has raised fears that hardcore insurrectionists remain at large and could threaten Biden’s swearing in on January 20th or other events leading up to the transition of power.

“We saw calls for violence against law enforcement and encouragement to armed struggle . . . and warnings to get ready because this is only a taste of what’s to come,” said Joanna Mendelson, associate director at the Anti-Defamation League’s Center on Extremism.

Federal prosecutors on Wednesday said that more than 170 case files had been opened against pro-Trump rioters for infractions ranging from trespassing to sedition and murder, with more than 70 already charged.

But they also acknowledged they have not determined whether the attack was co-ordinated or instigated by what appeared to be more organised elements who participated in the rampage, or whether some participants were planning to kidnap and kill individual members of Congress.

The charges brought by federal authorities so far have not alleged a wider organisational effort, but department of justice officials have said their initial priority had been to identify and arrest people involved in the riot as quickly as possible and that broader charges might follow later.

Thus far, many of those charges have been brought against what the FBI has termed “aspirational” rather than “intentional” coup plotters, who may have talked the language of violent overthrow without any real plan to follow through.

Despite the discovery of the pipe bombs and the highly organised nature of some of the rioters, many experts believe much of the mob violence was opportunistic rather than carefully planned.

High-profile rioters who have been arrested thus far – including “QAnon Shaman” Jake Angeli, who was pictured wearing horns on his head, and Richard Barnett, who put his feet up on speaker Nancy Pelosi’s desk in her personal office – have little history of participation in organised extremist movements.

“The fact that they were there taking selfies and stealing podiums – it was more for the ‘gram’ in a sense,” said Marc-André Argentino, a doctoral candidate at Concordia University who studies how extremist groups leverage technology, referring to the Instagram social network.

Still, there are signs some had prepared for more serious violence. Two men charged with unlawful entry to the Capitol were pictured in military gear and with plastic handcuffs, echoing the equipment carried by the militia who planned to abduct Michigan governor Gretchen Whitmer last year.

Another man was arrested with a pistol that had a round loaded in the chamber, while a fourth had brought 11 Molotov cocktails in his pick-up truck, each filled with melted styrofoam and petrol, “an explosive mixture that has the effect of napalm”, the DoJ said in a court filing.

In addition, the FBI said it was able to intercept and detain those known to lead the most violent and belligerent groups, such as Enrique Tarrio, head of the extremist Proud Boys organisation, who was arrested and banned from Washington two days before the riot, after being found in possession of two high-capacity firearms magazines.

Many of the most hardline supporters of President Donald Trump did not attend last week’s rally, believing it had become impossible to overturn Mr Biden’s victory.

Still, some of the most prominent members of the right-wing nativist movement who rioted at the Capitol remain at large, and experts believe that some other militants who stayed away may be inspired to target the inauguration because of the attack’s success in disrupting the certification of Biden’s victory.

“They would love to disrupt the inauguration – they’re violent revolutionaries who wish to kill their enemies,” warned Mike Rains, who runs Adventures in HellwQrld, a podcast focused on QAnon. “They’d love it if the coup had gone better.”

The planned deployment of troops to Washington could encourage extremists to choose other targets, said Megan Squire, a professor at Elon University in North Carolina.

One of those whose whereabouts remain unknown is Tim Gionet, an alt-right member who uses the moniker Baked Alaska. Gionet, who was arrested in Arizona last year after attacking a bouncer with mace, live-streamed the riot while viewers donated to his stream and gave him directions, including calls to violence.

Mendelson said that the more than 50 individuals the ADL had helped to identify ran the ideological gamut, with about a dozen extremists affiliated with white supremacist and anti-government movements.

Nicholas Ochs, a Hawaiian Proud Boy leader, was arrested for unlawful entry on Friday, but on Tuesday said that he had been released on bond. A former congressional candidate, Ochs posted videos and tweets of the storming. “The people inside didn’t even wreck things,” he wrote on Telegram the day after the riot. “It was just kinda a happy atmosphere to be honest.”

But the scale of the riots means that many have yet to be arrested. “There were thousands of people,” Mendelson said. “For the process to be accurate and thorough takes some time.” – Copyright The Financial Times Limited 2021